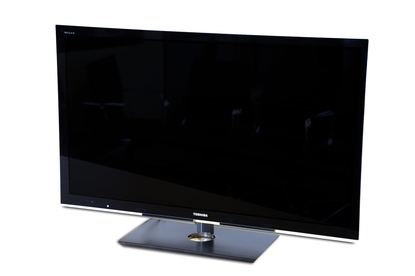 Toshiba's Regza 46WL700A is a competent LED TV that displays vibrant, smooth and detailed video. It's reasonably effective at displaying 3D content as well; our main gripe is its lack of Web features like IPTV or any on-screen widgets. With this in mind, its recommended retail price is a little high. We have no complaints about its picture quality though.

Toshiba's Regza 46WL700A is a 3D-capable LED TV. It's got good picture quality for both high- and standard definition content and creates a pleasing 3D effect, but its lack of online functionality makes it seem a little basic when it's up against feature-packed competitors.

The Toshiba Regza 46WL700A uses edge-lighting from LEDs — this shows in its less-than-3cm-thick chassis. The swivelling cut-glass stand is a welcome inclusion, allowing you to adjust the TV over a wide range of motion.

Toshiba bundles a pair of active shutter 3D goggles with the Regza 46WL700A. They're not especially fashion-forward, but neither are other manufacturers' 3D specs. Unfortunately no recharging option is available so you'll have to stock up on coin-sized cells if you intend to watch a lot of 3D content. Extra pairs of glasses cost $129 each.

The Regza 46WL700A has an Ethernet port, but its main use is for streaming DLNA content from a PC or laptop via your home network. If you have a networked computer set up with Toshiba's Media Controller software, you're able to push YouTube clips to be displayed on the TV screen — useful if you're browsing the site on your laptop but want to show a movie to friends or family. Apart from this, the Toshiba 46WL700A has no IPTV, so if you run out of movies to watch and there's nothing on TV it's time for a trip to the video store. This is our major bugbear with the Toshiba Regza 46WL700A — it just doesn't have the diverse range of features that its competitors do.

To be fair, the Toshiba Regza 46WL700A does distinguish itself with impressive 3D and 2D video performance. It's strong when it comes to upscaling DVD-quality video and broadcast digital TV, and the picture it displays is clean and vibrant.

We ran through the Full HD Blu-ray versions of Terminator: Salvation and The Dark Knight, as well as The Matrix on DVD, some digital TV and some compressed video files streamed over DLNA. Video was clear and noise-free, with default picture modes that are very close to the best we could achieve with custom-tweaked settings. The difficult opening scenes of The Dark Knight display some bloom — backlight bleeding from displaying small points of white light on a black background — but this is a small problem and common to almost all LED and LCD TVs (except those with a full array of LED lights behind the screen itself).

The screen handles upscaling content (anything lower than Full HD) very well. Our DVD video was smooth and still displayed excellent detail, with no unintended blurriness in our much-watched test scene of The Matrix. Broadcast digital TV — probably what you're going to be watching most — looked equally smooth and fluid without any obvious artefacts or jagged edges on both standard and HD material.

When watching 3D video there's a small amount of cross-talk noise, but it's certainly within bearable limits and we don't expect most viewers will notice it often. We'd put the Toshiba Regza 46WL700A roughly on par with the Samsung Series 7 but slightly behind the Panasonic VIERA TH-P50VT20A. We ran through Cloudy with a Chance of Meatballs and found it a pleasant experience. We'd happily watch 3D movies with the Toshiba Regza 46WL700A, as long as it was in a dim room and there was no fluorescent lighting near the screen — the glasses don't react well to fluoro lights, creating a flickering effect. Sitting close to the TV (around a metre away) we found the 3D effect to be pronounced and immersive without causing nausea or any adverse effects. We are pretty hardy when it comes to visual tricks though, so try it out in a store first if possible.

The Regza 46WL700A from Toshiba is a competent TV — it's the equal of Samsung's Series 7 LED TV, and mid-range Sony LED TVs like the NX710 when it comes to displaying Full HD 1080p content. It's also able to create an immersive 3D effect. What we didn't like was its lack of Web features — there's no integrated IPTV apart from YouTube, widgets, or social networking services to speak of. This might not be a big problem if you're happy watching local content, but when the TV is being compared against models from Samsung and Sony it's decidedly lacking in this area.

With this in mind we think the television is a little more expensive than it should be — shave half a thousand dollars off the price and it's much more attractive. We've scored this TV based on its good picture quality; the lack of Web connectivity holds it back from further accolades.