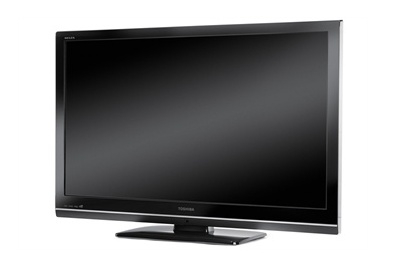 The Toshiba Regza 42RV600A is a good television for buyers on a budget. For under $1800 you get a 42in screen with good upscaling and a few nifty features that make it easy to use.

Toshiba's Regza 42RV600A is a 42in LCD television featuring the company's latest suite of image enhancement features. It lacks a 100Hz mode to smooth out fast motion, but apart from this we found the screen to be a good choice for watching high-definition and standard-definition content.

The design of the Toshiba Regza 42RV600A is clean and modern, but it suits a more conservative living space than the all-out designs of TVs such as the Samsung UA46B7100 LED TV and the Samsung PS50B850 plasma. Four HDMI ports, including one on the side, take care of modern devices like Blu-ray players, while a suite of composite, component and VGA analog connectors means a computer or older DVD players, for example, can easily be added.

The Toshiba Regza 42RV600A has a 1300:1 static contrast ratio, but dynamic backlight adjustment boosts this to 50,000:1. This is still nowhere near the astronomical figures quoted by leading plasma and LED televisions, but it's a solid enough number to make everyday viewing pleasant. The screen's wide viewing angles means that it's good for large living rooms — there's no colour shift or loss of brightness until you watch TV from quite far to one side.

We ran the television through a series of tests to gauge its abilities, using both broadcast television and Blu-ray video content. Courtesy of a new Super Resolution Plus system, the Toshiba Regza 42RV600A has excellent scaling abilities, manifesting as very smooth and artefact-free broadcast television. DVD content is also very clean and smooth, with no visible artefacting or distortion. When presented with video at the screen's native Full HD resolution, the picture on the Regza 42RV600A is sharp and detailed, with good gradation and no excessive sharpening that we could see. We would have liked a higher contrast ratio to make more detail visible in the darkest scenes of our test footage from The Dark Knight, but overall picture quality was good for an LCD screen at this price point.

We found a few issues during our motion tests. Since the Regza 42RV600A is the cheapest of Toshiba's Full HD models, it doesn't have any image smoothing and it operates at 50Hz. Wide panning shots in Planet Earth saw a small amount of stuttering and jitter, but for the most part the screen's 6ms response time is enough to display motion smoothly. Avid sports fans with an eye for detail might be best served by another TV, though.

The Toshiba Regza 42RV600A has a 5.5 star energy rating, consuming 134 Watts during normal operation. With a few picture tweaks we saw this rise to 140W but overall this screen is a good choice if you're looking to upgrade without increasing your power bills.

The Regza 42RV600A is a competent LCD television given its reasonably low price. The Auto View and Super Resolution Plus features optimise images, and the screen delivers good overall picture quality. If you can afford a little more, you may want to check out the 100Hz model: the Toshiba 42XV600A.