The inside of the device looks far more pleasant. Even though the design choices remain questionable, I really began to feel like the engineers at Toshiba were trying to make this laptop into an experience. The X770's keyboard backlight is a bold shade of red that very much suits the otherwise disjointed design of this notebook. The level of light behind the keys is bright enough to illuminate the keys, yet won't be distracting or blinding during heavy early morning gaming sessions.

The keyboard itself has a full-sized chiclet style with a good layout considering the large size of the chassis. I found the keys to be very functional and well spaced. The feedback on the keys, though a little spongy, was responsive and comfortable; this means the device will be fine not just for long gaming sessions but for any extended typing activity.

The Touchpad has a nice matte surface and large dimensions. It's a good touchpad, but its left- and right-click buttons almost brought me to tears on a few occasions while performing the simplest of tasks. For the money you pay, I can only describe the touchpad buttons as limp and exhausting to use. However, Toshiba knows that within the gaming market an external mouse is still king.

A true beacon of light for the Qosmio X770 is its set of Harmon/Kardon speakers. The grilles remain rather outlandish, but the quality of this 2.1 speaker system is outstanding. The sound is loud and full with the subwoofer providing nice low-frequency bass sounds. The two top speakers refuse to distort, even at high volumes. You could fill a reasonably large room with sound from this laptop without sacrificing the quality. 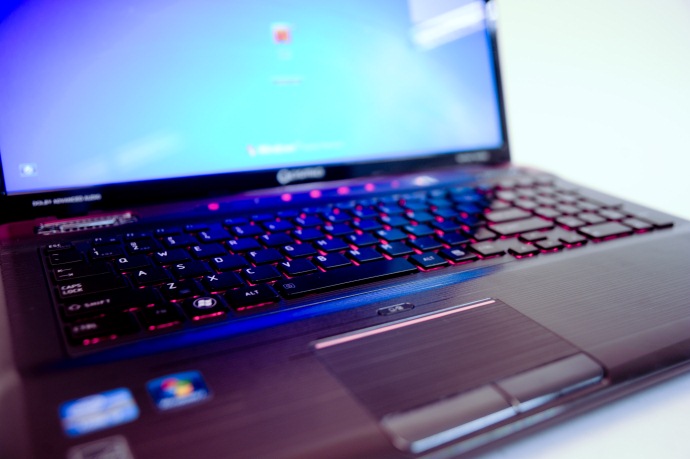 The Qosmio X770 also features a 17.3in, 120Hz, Full High Definition 3D screen. This screen alone is a reason to consider this notebook. The display itself has a glossy finish and, unfortunately, some slightly washed out colours. With some quick adjustments, games and applications all look above average, though I would advise professional designers and picture editors to look elsewhere.

I have been a sceptic when it comes to 3D, mainly due to poor experiences with controls and sub-par drivers. The Qosmio X770 proved to be a smooth experience and enabling 3D was simple thanks to the touch button above the keyboard, which can turn 3D mode on and off during programs at any time.

Once enabled, all that is required is that you switch on and wear the supplied Nvidia 3D Vision glasses. I found some games worked better than others with 3D enabled. Skyrim stood out: the depth created by the 3D processing meant a simple action like drawing a bow became exaggerated and heroic; looking out at the landscape was almost comparable to real life. There are, of course, some small issues with decals and HUDs appearing to float, which can be a little annoying, but this does not draw much away from what is an incredibly immersive experience that I advise all to try. 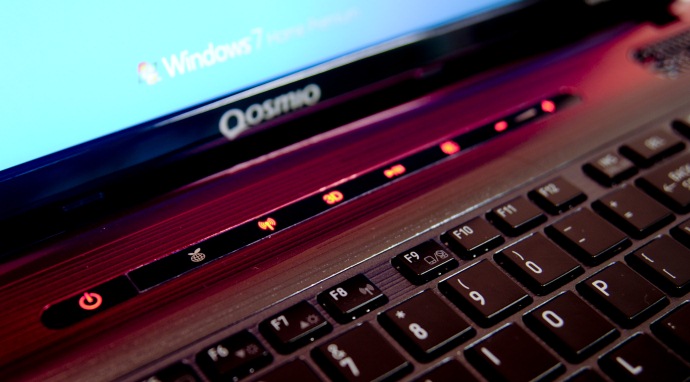 Enable or disable 3D at the touch of a button.

With its powerful configuration, the Qosmio X770 attained good results in our synthetic tests, recording 13752 in 3DMark06, P2233 in 3DMark11, 3218 in PCMark7 and 9862 in PCMark Vantage. Its Intel Core i7-2630QM, quad-core CPU, 8GB of DDR3 SDRAM (1333MHz) and the Nvidia GTX 560M (1.5GB) graphics adapter combined forces to allowed the Qosmio X770 to play all the modern games we threw at it, most on "high" visual settings and at the native Full HD resolution of the screen. Our test games kept a pace of around 40 frames per second and at no point seemed to struggle or dip heavily in performance.

These real world tests really show off the notebook's raw power, which is clearly enough to meet the needs of a majority of gamers — only a few would be dissatisfied with these results. The X770 clearly struggles when running ultra settings in Full HD. With 3D enabled, this performance only drops further. Portable performance technology is still unable to cope with the high level of performance you find in a desktop, but of course this is where you have to decide for yourself whether a gaming notebook such as the Qosmio X770 is right for you.

The laptop remains cool to touch in almost all locations, and even the warm spots remain comfortable to touch. During extended playing sessions, hot spots can be found underneath the keyboard on the left side, which is just above the graphics card, and on the bottom in the location of the CPU. Due to the large chassis size, a large fan has been installed. The notebook remains quiet during standard use (word processing, Web surfing), but under a heavy load (gaming, media encoding) the device will make some noise. It is not too loud, and it certainly won't overshadow the laptop's amazing speaker system.

However, due to the placement of the vent on the right side, the rushing air is definitely audible. Considering that some notebooks in the 17.3in market pride themselves on having a stealth-like quietness (such as the Asus G73 or G74) and manage to keep the device cool and quiet even under the heaviest loads, I do feel the Qosmio should be quieter than it is.

The hard drives run at 7200rpm, but I wish that Toshiba included RAID to allow for improved speed; or at the very least replaced the one of the disk drives with a proper solid state drive, which would allow the operating system and a few select applications to run a lot faster. In CrystalDiskMark, the system drive recorded a read rate of 98.2 megabytes per second (MBps) and a write rate of 87.32MBps.

The battery life of the Qosmio X770 is disappointing. With many gaming laptops now beginning to reach a solid 3.5 hours of battery life while Web surfing and word processing, the Qosmio, with its 8-cell, 47 Watt-hour battery, manages a meagre 49min. That's with the power settings and brightness set to "balanced". I did manage to get 68min by turning the brightness to low, the CPU to five per cent and disabling the wireless adapter. To sum up the situation: "if there ain't no plug, there ain't no love" and "if there ain't no power, you get less than an hour".

The Toshiba Qosmio X770 left an immediate impression on me for being possibly the ugliest notebook I have ever seen; it's rough, looks outlandish and is made entirely from cheap plastics. The build quality didn't feel good to me, the screen quality was just average and the battery life was short enough to make a rhyme. That, in addition to a steep asking price (comparable to an Alienware system) makes it hard to recommend.

However, under its exterior shell is a hardcore gaming notebook equipped with the serious hardware enthusiast-level players require. It then manages to bolster this hardware by being able to immerse you in a true gaming experience with a 3D display and excellent sound performance. If you're a gamer who isn't bothered by the aesthetic taste of Toshiba's engineers and want a laptop with solid performance, a good keyboard, 3D capability and excellent speakers, then the Qosmio X770 is well suited to you.