Toshiba's Qosmio F60 looks good, feels good to use and it delivers plenty of performance at a good price. It's not for people who demand the best eye candy when playing a game, but instead for gamers who don't mind sacrificing a bit of image quality and resolution for smooth frame rates. At the end of the day, the Toshiba Qosmio F60 is more than a gaming machine: it's a full-blown media centre that you can use to play Blu-ray movies, record TV shows and play music. We like it.

Toshiba's Qosmio notebooks have gone through many design phases in their short history: from the first HD DVD–equipped Qosmio G30, which cost $5500 and looked like a home theatre component, to the gaming-oriented Qosmio X300, which cost $3400 and looked like nothing you would ever want to put near your classy home theatre system. The 15.6in Toshiba Qosmio F60 (PQF65A-00Y002) is more tame than both those models: it's slimmer, has clean lines and isn't tacky. It packs features that make it a suitable desktop replacement notebook, media centre and gaming machine, and the best part is that it costs only $1899.

As far as gaming notebooks are concerned, the Toshiba Qosmio F60 is a relatively inexpensive one. It's definitely not a top-of-the-line laptop and it lacks many features that would make it better, such as a 7200rpm hard drive and dual hard drive support. There is no ExpressCard/54 slot and no USB 3.0 controller, which means expansion is limited to USB 2.0 (we’ll have to wait until Intel chipsets natively support the new USB standard later in the year).

The notebook's CPU, however, is an Intel Core i7-620M, which is currently one of the fastest you can get for a notebook, and along with 4GB of RAM and a GeForce 330M mid-range graphics adapter, the F60 is capable of undertaking plenty of high-end tasks. As we've already mentioned, you can use it gaming, but it's also great for video editing, video encoding and 3D rendering; we just wish it had a faster hard drive for these tasks as its 500GB, 5400rpm drive recorded only 23.29 megabytes per second in our transfer tests. Even the HP Mini 210 recorded faster average speeds. We'd like to see a drive capable of 28-30MBps in this notebook.

In the Blender 3D rendering and iTunes MP3 encoding tests, the Qosmio F60 recorded times of 50sec and 53sec, respectively. The Blender time is exactly what we were expecting considering the CPU speed and the iTunes time is only one second off what the Core i7-620M-equipped Fujitsu LifeBook SH760 recorded. If you're in an archiving mood, the F60 will take approximately 1hr 6min to transform a two hour, 5.6GB VOB file to a 1.45GB Xvid-encoded file. This is an expected result (of course it will vary depending on the length of the movie). We used Auto Gordian Knot to encode our movie and this didn’t totally consume the CPU. This means you can still use the notebook for normal Web and office tasks without noticing any slow-down — as long as they are not disk-intensive tasks.

When a program commands the entire CPU, such as in the Blender 3D test, Intel's Turbo Boost function can kick in to take the CPU speed from its standard 2.26GHz up to 3.06GHz, which is over 200MHz slower than the peak speed we saw in the Fujitsu LifeBook SH760. The Turbo Boost frequency depends on the temperature and load of the CPU, so it could potentially go higher in other applications. Nevertheless, the lower Turbo Boost maximum speed did not diminish the F60's performance.

There is enough grunt in the F60 to run many DirectX 10–based games at low to medium settings. It will perform adequately when running car racing games such as Need for Speed: Underground 2 at a resolution of 1024x768 with medium detail levels, but at high detail levels there will be regular intervals of stuttering. Using Fraps, we recorded an average frame rate of 49 in Underground 2 with medium detail enabled.

Crysis will run on the F60 at its native screen resolution of 1366x768 quite smoothly, as long as you're not fussed about high quality graphics. Using the timedemo benchmark's 'ambush' map, Crysis recorded an average frame rate of 24 with the detail level set to medium, and 54 frames per second when set to low.

You don't want to have the F60 on your lap while you're gaming, as you'll block the fan's air intake and the base will get very warm. Besides, for many games you'll need a mouse and it's pretty hard to aim while rocking one over an armchair support. The screen is also very glossy, so you'll want to position the F60 somewhere in your home where reflections won't be a big problem; that is, you should place it facing away from windows and preferably without any lamps or ceiling lights situated in front of the screen. 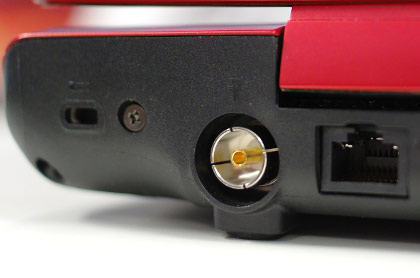 The Toshiba Qosmio F60’s antenna port is full sized, so you can use your existing cable.

But it's not only gaming that the F60 can be used for; it's also a very useful media centre. It comes equipped with a single digital TV tuner and has a full-sized antenna connection on its spine, which means you don't have to fiddle with adapters. You can use the F60 as a PVR to time-shift and record shows and there is an integrated infrared transceiver, so you can use a media centre remote to control it while you are on the couch.

The best part is, if you have a Toshiba TV with a REGZA-enabled HDMI port, you don't even need a media centre remote to control it. The notebook has an HDMI-CEC port, which means if you connect it to a REGZA-LINK-enabled Toshiba TV, you can use the TV's remote control to power and navigate the notebook. The HDMI-CEC port may work with non-Toshiba TVs with an HDMI-CEC capable port; we couldn't get it to work properly with a Samsung 6-Series TV — the Qosmio F60 gets picked up as an AnyNet device, but it can't connect properly.

The F60 has a Blu-ray player and DVD burner combo drive installed, so it can be used as a primary disc playing device. You also have 802.11n and Gigabit Ethernet at your disposal for network streaming.

With a weight of 2.85kg, a width of 39cm and a thickness of almost 4cm, the Qosmio F60 isn’t a behemoth. It will fit into a modest backpack and can be carried to work or school easily, should you ever want to show off. Its keyboard has glossy, flat keys that are comfortable to type on; they are soft and possess good travel and bounce. You get a dedicated number pad, which can help for gaming as well as number crunching, and there are no undersized keys to trip you as you type.

The touchpad has the same pin-stripe pattern printed on it as the palm rest, but it has its own texture, as well as a light so that you can locate it in the dark. It feels good to use and it’s responsive. There was a problem with the Synaptics driver though, and we had to reinstall it. You can access all the drivers for the laptop by navigating to the Toshiba folder on the Start menu.

A six-cell battery is installed on the spine of the Qosmio F60 and it lasted 1hr 39min in our run-down test, in which we disable power management, maximise brightness, enable Wi-Fi and loop an Xvid-encoded video. This is a standard time for a 15.6in notebook with a powerful CPU — the Fujitsu SH760, which has a similar configuration but uses a smaller, 13.3in screen, recorded a time of 2hr 25min in the same test. Toshiba gives you an Eco utility so that you can see how much power you’ve used. 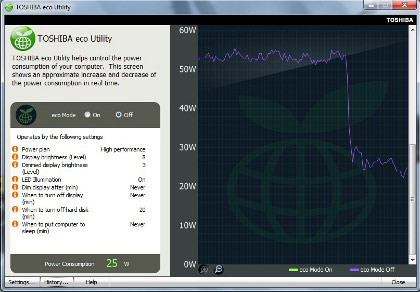 The Eco utility shows you how much power your laptop is currently consuming, and how much it has consumed over time.

There are a stack of utilities installed on the Qosmio F60, ranging from the USB Sleep-and-Charge configuration tool to a hard drive protection sensitivity utility. You also get a face recognition program that can work with the built-in webcam; there are PC health monitoring tools, a password utility and even software that allows you to use voice commands to launch programs and perform program actions (it doesn’t work too well with the built-in microphone). Suffice it to say, you can spend an entire day sifting through all the preloaded software and finding out what it can do.

We like the Toshiba Qosmio F60 for what it is: an affordable glossy gaming and media centre laptop. It feels good to use, has plenty of features (both hardware and software) and it performs reasonably well. We just wish it had a faster hard drive and that its screen wasn’t so glossy. Don’t purchase this laptop thinking it will run every game smoothly with high image detail enabled — it’s strictly for mid-range gaming. It will run games just fine as long as the eye candy is not turned up all the way.