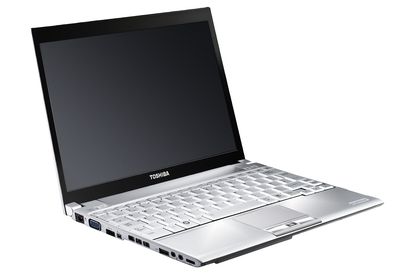 Although the Toshiba Portege R500 is clearly not a power user's choice, its lightweight frame, small size and good battery life make it an excellent choice for simple tasks such as email, Web surfing and simple office applications while travelling for business.

Toshiba is touting its Portege R500 as the lightest notebook in the world. At 1.2kg without its power supply, we are inclined to agree. It is slim and stylish, but still manages to include an internal optical drive, an SD card reader and a basic set of ports. It's not a very powerful system, but offers great portability and would suit regular business travellers to a tee.

The Portege R500 uses one of Intel's latest ultra low voltage (ULV) CPUs from its latest Centrino Platform (codenamed Santa Rosa). The U7600 Core 2 Duo CPU is the top of the line when it comes to ULV processors, offering two cores at a 1.20GHz with a 2MB L2 cache and a 533MHz front side bus (the non-ULV models offer up to 800MHz). However, this processor is built for low heat and good battery life, not speed - so don't get too excited. Although the CPU is a low power model, the system does include 2GB of DDR2 RAM for a bit of a boost. A 120GB hard drive has been installed, which seems plenty for a notebook that's probably best used for email, document reading or writing and other work and travel related tasks.

As far as hardware features go, there's little to talk of, apart from the key internal components, the DVD re-writer and the 12.1in LED backlit display. Both audio channels are funnelled through one tiny speaker on the left above the keyboard, which is surprisingly loud for its physical size, and would be enough to watch a movie by as long as there isn't too much ambient noise. A set of audio jacks for headphones and a microphone are available, and a volume dial on the left edge allows quick control over the volume settings.

There are limited connectivity options, due to the smaller chassis, but the basics are included, such as three USB ports and a mini FireWire port. A VGA output is also included, which will allow this unit to connect to a projector for meetings, or to a larger monitor at home or work. An SD media card reader and a PC Card slot are included for good measure.

The build seems fairly sturdy, despite its size, though it does feel a little bit toy-like with its lightweight frame. The screen is probably the biggest concern as far as build quality goes. The extremely thin LCD enclosure allows a disturbing amount of flexibility and we wouldn't recommend this notebook be subjected to any roughhousing purely for the sake of the LCD panel. The screen itself offers a nice bright image with decent contrast, but its viewing angle is poor - just like the majority other notebook screens.

In our MP3 encoding tests, which put the CPU on trial, we saw expectedly slow performance. Using Cdex (which encodes using only one core of the CPU) it took the Portege R500 229 seconds to encode 53 minutes of WAV files to 192kbps MP3s. Using iTunes (which uses both cores) to encode the same data took 140 seconds when compressing to 56Kbps MP3 files. Neither of these results are fast by comparison to notebooks in the mid-high performance range, but we weren't expecting the Portege R500 to be on par.

As we've stated this notebook is not intended for power users, but rather for portability and travel. In our battery test, where we loop a DVD until the battery is completely drained, this ultra portable device did very well; it lasted a solid 151 minutes, about an hour longer than the average Centrino Duo notebook. The DVD test is a worst case scenario as it uses both the optical drive and the speakers, on top of the other components normally involved in the notebook's operation; namely the CPU, the hard drive and the screen among others.