A small, easy to use Toshiba netbook with great battery life Toshiba's NB300 netbook has good ease of use, it's thin and light, and it supplies a long battery life for when you're on the road. We wish it had a faster hard drive and that its screen wasn't so glossy, but these quibbles are outweighed by great battery life and a USB port that can even charge an iPhone when the netbook is powered down and sitting in a backpack.

Toshiba's NB300 is a 10in netbook with a slim frame, a long battery life and an advanced Sleep-and-Charge USB port. It's an almost perfect netbook for travellers thanks to these features, but even students and business users who are in the market for a tiny laptop should consider the NB300. However, it's not a very fast netbook — its hard drive, in particular, is a bit of a slow coach — so don't expect it to be anything more than a convenient tool for Web browsing, creating office documents and watching standard-definition videos.

The Toshiba NB300 comes equipped with an Intel Atom N450 CPU, which runs at 1.66GHz and has Hyper-Threading. It's a much more advanced CPU than the Intel N280 CPU in previous generation netbooks — it has integrated graphics and memory controllers — but it's not faster. The NB300 will perform just like any other netbook on the market and, in fact, it's actually a little slower than the Toshiba NB200, which it replaces.

In the iTunes MP3 encoding test — in which we encode 53min worth of WAV files to 192Kbps MP3s — the Windows 7–based NB300 recorded a time of 7min 46sec, which is 11sec slower than the Windows XP-based NB200. It's not much of a difference in the overall scheme of things, but it shows that even though the NB300 is a new-model netbook with a slightly different body kit and engine, it provides almost the same amount of horsepower. While using it for everyday tasks it sometimes feels sluggish, particularly when launching programs and switching windows. You just have to remember not to do too much at the same time.

The rest of the configuration is 1GB of DDR2 SDRAM, integrated (in CPU) Intel GMA 3150 graphics and a 250GB hard drive. We wish it had 2GB of RAM instead — which is the maximum it can handle — but it can be upgraded easily in the future; all you have to do is remove the cover of the single memory slot. Hard drive upgrades aren't as easy, as Torx screws have been used on its cover and it can't be opened unless you have a star-shaped screwdriver to hand.

This is a shame as the hard drive turned out to be slow in our tests — even by netbook standards. The drive returned a transfer rate of 18.92 megabytes per second in our tests, which is 2-3MBps slower than the average. A solid-state drive would be a very sweet upgrade for this netbook if you don't require a mountain of storage; as it would make the NB300 a little lighter, improve the battery life slightly, and, depending on the type of SSD, it would be faster. 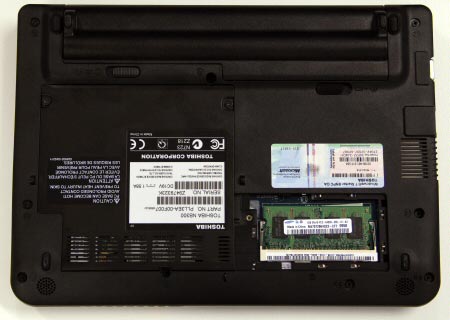 It's easy to upgrade the RAM, but you'll need a Torx screwdriver to get to the hard drive.

A 3D accelerometer is installed to help detect excessive movement and park the hard drive heads to prevent loss of data. It's very sensitive by default — even vigorous typing can set it off — but you can turn down the sensitivity so that the hard drive isn't always stopping and starting.

One of the best features of the NB300 is its Sleep-and-Charge port. It can be used to charge MP3 players and phones with USB connections, even iPhones. That means you can leave your netbook switched off in your backpack and plug in your iPhone to charge it. It's a great feature for when you're on the road. It was available in the NB200, but it's even more useful in the NB300 because the standard battery it ships with is so much bigger.

The Toshiba NB300 has a 6-cell battery with a 61-Watt hour rating and it managed to last 5hr 2min in our rundown test. In this test we disable power management, enable the wireless radio, maximise the brightness and loop an Xvid-encoded video until the battery completely drains. By lowering the brightness and switching off the wireless radio you will be able to get more life out of the netbook; you could potentially watch up to three two-hour movies while you're on a plane, for example. Toshiba's 'Eco' mode can also be used to prolong the battery life when you're not using it as a video player. It will dim the screen and switch off the hard drive when it's not in use, as well as institute sleep mode and switch off the screen after predetermined idle periods. It even comes with a utility that graphs your power usage and carbon footprint.

The worst part about the long battery life is that the critical battery alarm is set to go off when the capacity reaches 10 per cent. The problem is that 10 per cent of the battery's capacity is 49min (according to Windows 7's notification) so you'll want to go into the custom power settings and switch off the alarm.

Even though the NB300 is slimmer than the NB200 netbook it replaces, the big battery means that it weighs a little more: 1.25kg compared to 1.1kg. This is a good compromise and shouldn't be seen as a downside, especially since the NB300 is still very easy to carry with you everywhere you go.

The netbook feels no less sturdy than the NB200, although its keyboard does bounce ever so slightly. Nevertheless, it's a tactile keyboard that's comfortable to type on as the keys are large (18mm wide) and only a handful of are half-sized (such as the alt, arrow, page, function and right shift keys). The tilde key is the only misplaced key on the keyboard as it sits between the left alt and the space bar instead of being next to the 1.

There is a cluster of small keys on the right side of the keyboard, but the alphanumeric keys are a luxurious 18mm wide.

One thing we'd change about the keyboard is the function keys. We'd take a leaf out of HP's book (for the HP Mini 210) and swap around their functions so that you don't need to hold down the Fn button in order to change the brightness or disable the wireless radio.

A big palm rest of almost 7cm makes the NB300 very comfortable to type on while it's on your lap, and it's a well-balanced netbook that won't fall off your lap when you lift your hands to take a break. We also love the big touchpad, which at 7.9x4.1cm is bigger than the touchpad on the Toshiba Satellite M500. It supports three gestures: pinching (zooming), scrolling (using two fingers) and rotating. 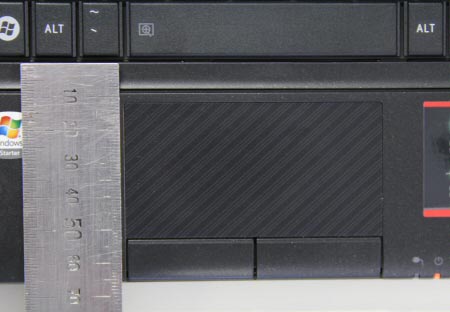 The palm rest is large and makes the NB300 very comfortable to use.

The 10in screen has a native resolution of 1024x600, which is the norm for netbooks of this size. It's glossy, which means that reflections can take a toll on your patience — especially if you use the netbook outdoors. In saying that, reflections from this model weren't as bad as we've seen from others, and as long as you get the angle right you might be able to put up with them. We'd prefer a less reflective screen for a netbook that is primed for use while outdoors and on the road. 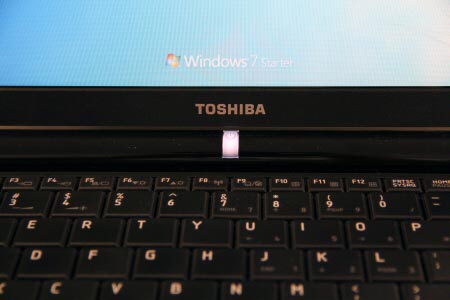 The power light in the centre of the netbook might also be annoying, especially when using it at night.

There is no built-in 3G module, nor an ExpressCard slot, but there are three USB 2.0 ports should you want to connect a 3G modem. The wireless radio supports 802.11n, which is a feature we love, and you also get Bluetooth, so that you can transfer files from your phone or connect a cordless mouse.

Overall, the Toshiba NB300 is a little gem. Sure, it can be improved (and we hate the use of Torx screws for the hard drive compartment), but its build quality, user comfort and features make it one of the best little laptops on the market.