Toshiba's NB200 is not a typical netbook -- it can charge your iPhone even while it's switched off or in sleep mode! 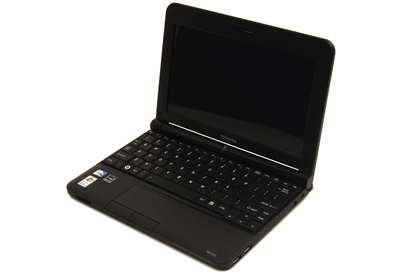 The Toshiba NB200 (PLL25A-00D002) is a little expensive, but it's well built, performed well in our tests, and has unique features such as hard drive protection and Sleep-and-Charge USB 2.0 — you can charge your iPhone while you're on the road! It's the nicest looking netbook on the market and it has a great keyboard. The only drawback is that it gets a little hot.

Its sleek chassis, excellent keyboard and bright, 10in screen, as well as features not seen on other netbooks (a Sleep-and-Charge USB 2.0 port and 3D hard drive protection), make Toshiba's NB200 (PLL25A-00D002) the nicest 10.1in netbook on the market. Of this we are sure.

The Toshiba NB200 (PLL25A-00D002) ships with an Intel Atom N280 CPU, which is Hyper-Threaded and runs at 1.66GHz. It only has 1GB of DDR SDRAM, but it was still quite quick in our benchmarks. It completed the iTunes MP3 encoding test (where we convert 53min worth of WAV files to 192Kbps MP3s) in 7min 35sec, which is 41sec faster than the MSI Wind U123T netbook and 26sec faster than the Dell Latitude 2100 ruggedised netbook.

During general usage, the Toshiba NB200 (PLL25A-00D002) feels a little sluggish, particularly when you boot it up the first time; it is loaded with Norton Internet Security and other System Tray-dwelling utilities that start up with Windows XP. Nevertheless, when you're only running one or two applications at a time and don't have to wait for background applications to finish their tasks the NB200 performs just fine.

It ships with a conventional spinning hard drive instead of a solid-state drive, which is a shame considering Toshiba is a huge player in the solid-state market, but it's the only way to provide a large storage capacity without attaching a high(er) price tag to the netbook. You get a roomy but not particularly swift 160GB, 5400rpm hard drive with the NB200. It recorded a transfer rate of 19.85 megabytes per second in our file transfer tests, whereas other netbooks tend to break the 20MBps barrier. The slight hit in performance could be due to Toshiba's HDD Protection utility, which works in conjunction with a built-in accelerometer to park the drive heads when it detects vibration and shock. At its default setting it is very sensitive and will park the heads even if you slightly move the netbook while using it in your lap; you can adjust its sensitivity using the utility.

This hard drive protection is one of the unique features of the NB200, and it's a worthwhile feature to have considering a netbook is perfect for use while travelling. Similarly, there are no other netbooks with a Sleep-and-Charge USB 2.0 port (apart from the Toshiba NB100); it's another feature that is very convenient for use while on the road.

The Sleep-and-Charge port lets you to charge portable devices while the Toshiba NB200 is switched off or in sleep mode. It is the most advanced version of Sleep-and-Charge in Toshiba's notebook range, as it supports the Apple iPhone. We tried with an iPhone as well as a Creative MP3 player, and it charged both of them without any problems. We didn't have to change Sleep-and-Charge mode in order for our devices to be charged, but there are four modes you can choose from if the default does not work for your device. You can also configure the NB200 to stop charging USB devices when its battery reaches a certain level.

For example, you can set it so that it stops charging devices once the battery level reaches 50 per cent. Only one of the NB200's USB 2.0 ports is Sleep-and-Charge capable, and it's denoted by the lightning bolt logo next to the USB 2.0 logo.

Toshiba provides a link to download Microsoft's SyncToy utility, which lets you keep files on the NB200 and your main computer synchronised. The shortcut is provided to help new users in particular manage their files between their computers, but it's not an intuitive utility for novices.

The Toshiba NB200's 10in screen has a resolution of 1024x600. It's a glossy screen so it is prone to reflections, especially if you use it outdoors; it's not hard to view once you get the angle just right. The LCD screen uses a traditional fluorescent tube for a backlight, rather than LED technology, but its colours and luminance are still very good.

Power management can be undertaken using the Toshiba Power Saver utility, which allows you to customise the CPU speed, screen brightness, and cooling method, or you can just use the default settings for each profile. We tested the NB200's battery life while using full power, maximum brightness and with the wireless radio enabled. Its 3-cell, 25 Watt hour battery lasted 2hr 18min in our video rundown test, which is almost exactly what we expected. Versions of the NB200 (PLL20A-00P001 and PLL20A-00Q001) are available with a 6-cell battery, but are more expensive ($949 for both models).

The biggest drawcard of the NB200 is probably its keyboard. We love it! It feels solid to the touch and is very comfortable to type on. The 18mm-wide keys have good travel and the keyboard doesn't bounce. The 7.9x4cm touchpad beneath the keyboard is spacious, responsive and supports vertical scrolling.

The only problem with the Toshiba NB200 is that it gets too hot. It's not as bad as HP's Mini-Note 2133, but it's enough to become uncomfortable if you use it on your lap for long periods of time. Toshiba even goes as far as placing a warning label on the base, saying that the 'PC base can be become hot' and to 'avoid prolonged contact to prevent heat injury to skin'. The label is located on the access panel for the single RAM slot. There is also an access panel for the hard drive, but this can't be opened with a regular Philips head screw driver; it requires a screwdriver with a star head.

The Toshiba NB200 netbook costs $899, so it's a little expensive, but it's well built, performed well in our tests, and has unique features such as hard drive protection and Sleep-and-Charge USB 2.0. It's also the nicest looking netbook on the market and it has a great keyboard. The only drawback is that it gets a little hot.