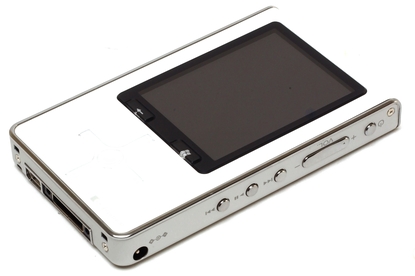 Stand out from the iPod crowd with this excellent Windows-based media player.

One of the first things that strikes you when looking at Toshiba's latest portable media player is the presence of a Windows key. You certainly don't see those on the iPod, and that's because the gigabeat S is the first player to have Windows Portable Media Centre on board. This means there's an incredibly simple and intuitive interface. The gigabeat S is a worthy addition to the media player market, and this is primarily due to the addition of Windows.

Video playback is smooth, and the gigabeat's bright, albeit small screen is more than adequate for watching the occasional movie. As the gigabeat's display is portrait, it's necessary to turn the device on its side to watch movies, which actually places the controls in a more convenient location. The gigabeat's battery isn't the best we have seen though, with a slightly disappointing 2.5 hours of video playback. Music playback is excellent, with good sound quality and an intuitive layout for browsing songs.

This is in fact one of the best interfaces we have seen on a portable media device, with the simple and attractive Portable Windows Media Centre proving to be excellent. It is just as easy to use as the iPod's famed interface, and should prove no problem, even for novice users. Battery life is better for music, at around 12 hours, though this is still on the low side for a media player.

Toshiba also include a range of simple equalisation options, and automatic transfer of album art from Media Player. One thing we would recommend is ditching the included earphones, as like most bundled with media players, they aren't of a good enough quality. The gigabeat comes with a 3.5mm headphone jack, so it will support third party headphones. The radio is another welcome inclusion, with automatic tuning making station selection easy. We found reception to be good, though the gigabeat did have a tendency to find and store distant stations that had very poor reception. It is possible to adjust the sensitivity of the tuner, but this cut off stations that we would rather have kept.

The unit is touted by many as another in a long succession of iPod killers, and it's certainly fair to make the comparison. Our test unit was the white 30GB version, though there's also a black version equipped with a 60GB hard drive. It is solidly constructed, though from our perspective it's not as slick-looking as the Apple stable. Unlike Apple's creations the gigabeat S is also a Windows-only device and thus won't work with a Mac.

Aesthetically, Toshiba has continued the trademark gigabeat styling. There's the 2.5in screen, positioned in portrait rather than landscape orientation, which makes it feel bigger than rival players such as the iPod, though in reality it's exactly the same. The dimensions of the unit are also similar to the iPod video, though it's a little thicker, measuring 59.9mm x 13.2mm x 99.9mm and weighing 127g. Like the gigabeat x60 there's a five-way directional control on the front with volume and track controls on the side. It's also nice to see the return of an on/off switch. Two extra buttons adorn the front: a back button, and the previously mentioned Windows key. Pressing this brings up the Start menu from which you can access all the gigabeat's features. These are: TV, music, pictures, videos, radio and settings.

Unfortunately TV is nowhere near as exciting as it sounds; there's no built-in TV tuner. But, fear not, it's still possible to get your favourite shows onto the gigabeat as WMV files. One option is to use Windows Media Centre and convert the files to WMV for viewing.

Similarly, music is also transferred using Windows Media Player. Previous incarnations of the gigabeat have used simplistic proprietary software, so it's nice to see Toshiba switching to a more integrated solution. We tested the device with Windows Media Player 11 (WMP 11), as this provides the best support. Copying music and videos is as simple as connecting the gigabeat through the USB port, and pressing 'sync' in media player. Windows will then transfer all the files over providing you have them in your media library. The gigabeat supports MP3, WMA (including DRM), WMA lossless and WAV audio formats, and WMV, MPG, AVI or DivX movies (provided you are using WMP 11). Media player even converts high definition content to a format the gigabeat can understand. We copied high definition DivX and 1080p WMV files with no problems whatsoever.

The gigabeat supports JPEG photo playback, and with folders for organisation and thumbnails for previewing each picture, browsing hundreds of photos is relatively simple. A photo slideshow accompanied with music can be set up and even output to an external screen using the bundled composite cable. The same feature is available for video files, although they are output at the native resolution of the gigabeat screen, so they don't look all that good. One other great feature is the inclusion of a USB adapter for digital cameras, which allows for the direct transfer of photos to the gigabeat. This is perfect when travelling, allowing you to back your shots up on the move without purchasing additional flash memory.

There are a few notable exclusions from the gigabeat, and these are primarily recording modes. There's no voice recorder, no option of recording from the radio and although pictures can be output to a television, they cannot be input. There isn't much in the way of extras in the package either. Toshiba includes Windows Media Player 10 on a disc, and there's also an AC adaptor, which is useful, but unlike older models of the gigabeat, there's no docking station or inline remote.

Overall, the gigabeat is a solid package. Other than the Windows interface there's little new on offer here, but everything it does, it does well. For anyone who wants to join the portable media revolution and wants something a little different from an iPod, the gigabeat S is an ideal solution.