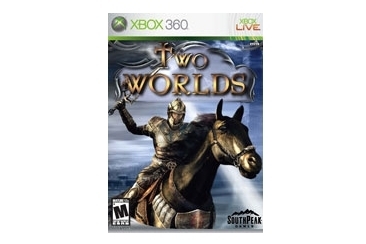 Those who have been waiting for a quality role-playing will be sorely disappointed, and anyone brave enough to search for the positive aspects in Two Worlds may find something to satiate their appetite, but finding those good aspects takes far too much effort than it should.

What good elements the game brings to the table is stifled by persistent performance issues, a laughably bad combat system, and a stilted, hackneyed plot, resulting in a game that role-playing aficionados should stay far, far away from.

But what's my motivation?

The plot itself is as bland as it comes: on the continent of Antaloor, you play as a mercenary for hire whose sister was kidnapped months earlier. You are contacted by her kidnappers who demand that, in exchange for her life, you retrieve several important artefacts for them.

From there on, you're pretty much free to do as you like, steadily completing the main quest or various other tasks throughout the land. The overall plot is bland enough, and any hope of quality voice acting saving the quickly sinking story is lost as--for some unknown reason--developers saw fit to include awkwardly archaic English words such as "mayhaps" and "forsooth" into almost every conversation, highlighting the inept dialogue.

All of this could be forgiven had the gameplay been able to stand on its own two legs, but combat is the biggest letdown of all. It often devolves into repeatedly smashing the right trigger to attack while occasionally throwing in a special attack for good measure. There are no active blocking controls to break up the monotony so you'll just button mash until either you or the enemy is dead. Magic users, on the other hand, have been given a wide variety of spells, ranging from the standard fireballs to elaborate clouds of poison and several excellent buffs.

Also, the lack of death penalties diffuses much of the combat tension; merely resurrect at the nearest shrine and go back to finish off what enemies you didn't kill the first time. Get used to respawning, though; Two Worlds has none of the monster levelling seen in Oblivion, so if you wander off, you're liable to run into something far beyond your current skills.

Some measure of relief comes in the form of the numerous side-quests that dot the landscape of Antaloor. In comparison to the main storyline, which is largely made up of fetching quests, these have much diversity and can often give players several ways to complete the given tasks, often producing masses of (sometimes rare) loot .

The interface doesn't help matters any, as it has been clearly developed with PC users in mind. There are plenty of options and information available, but the interface is cumbersome with little of the screen actually used to display information. Moreover, the inventory has not been properly calibrated to the 360's controller, making it difficult to pinpoint the item you wish to select.

Adding to this laundry list of disappointments, the real problem with Two Worlds is its graphical performance. While it does look splendid while you're standing still, viewing the expansive forces, soaring towers, towns and villages, the game slows to a crawl as you begin to move. There are remarkable slowdowns when engaging in combat; often several seconds go by before the game stutters back to life. Also, on closer inspection, many of the textures in game are quite muddy and more in keeping with last generation's console's graphical output.

Taken altogether, these issues vastly depreciate what positive aspects that Two Worlds had on paper.