Topfield's TRF-2460 Masterpiece HD Plus is a superb PVR for any TV junkie and we recommend it. Its twin HD tuners provide excellent reception and give you the ability to record up to four shows at once onto its roomy 1TB drive. We like the Web features of the unit and the ability to transfer shows to a PC, but the PVR's interface for playing MP3s and DivX files could be improved. We also hope that YouTube videos will work on the PVR again in the near future.

The Topfield TRF-2460 Masterpiece HD Plus is an elegantly styled PVR (personal video recorder) with a big 1TB hard drive and twin high-definition digital TV tuners. It's perfect for TV tragics who want an easy-to-operate device for recording their favourite shows. The best part is that the TRF-2460 can record up to four shows simultaneously. It's not perfect — in particular, its interface for playing MP3s and DivX files could be improved — but overall, the positives of this set-top box hard disk recorder outweigh the negatives.

Much like the Topfield TRF-7160, setting up the TRF-2460 is simple. Its twin tuners found all of the digital channels in our area and the reception from our very old antenna and cabling was close to perfect throughout our tests. It's easy to edit the channel list once you've finished tuning: simply hit the OK button on the supplied universal remote to bring up the channel list and delete all the duplicate channels.

To record TV shows, you can use the free-to-air guide and simply click on the show names or you can install the free, three-month IceTV subscription that ships with the PVR. An 802.11n USB adapter is also supplied; this plugs into the back of the PVR (there is also an Ethernet port for wired networking). The adapter worked perfectly with our Belkin N+ Wireless Storage Router (F5D8235au4A) using WPA2 security with the AES encryption algorithm. It found our access point on the first scan and we were connected a couple of seconds after we entered our password.

It takes a bit of grunt work to set up the IceTV guide: you need the serial number of your PVR, so write this down before you commit the unit to a snug position in your home entertainment cabinet. You then have to go to the IceTV Web site to create an account and enter your user details into the PVR. But once you start using IceTV, the chances are you won't go back to the regular, over-the-air guide. It's very easy to use and the main benefit is that you don't even have to be at home to schedule recordings — you can simply log into the IceTV site via your work PC, iPhone or Android handset to select all the shows you want to record.

A list of recordings sent to the Topfield PVR via the IceTV Web site. It's worth noting that the PVR has an adjustable padding feature so that each recording can start a few minutes early and finish a few minutes later, which is handy as most of the commercial stations never stick to their schedules.

With its twin high-definition digital tuners, the TRF-2460 Masterpiece HD Plus can record up to four TV shows simultaneously, as long as they are from two main channels. For example, you can record from One HD, Ten, GO! and Nine simultaneously because you are only recording from the Ten and Nine channel streams, but you can't record from Ten, Nine, Seven and ABC simultaneously. When you are recording from two channels, you can't watch a third, so if you are on Seven while you have simultaneous recordings scheduled to occur on Ten and Nine, then when the time comes, the device will switch to one of those channels. Similarly, if you try to schedule overlapping recordings from three channels (for example Ten, Nine and Seven) you will be unsuccessful.

Even while you're recording four shows, you can watch either a previously recorded show off the Topfield's internal hard drive, or a DivX file from an external USB hard drive. The TRF-2460 has two USB 2.0 ports at the front so that you can play DivX- and Xvid-encoded content off a hard drive on your big-screen TV. You can also listen to MP3s off a hard drive, but this is very poorly implemented. Essentially, we found that we could only play one file at a time and we couldn't select multiple files for a playlist, nor could we play all the files within a folder.

An eSATA port is located at the back of the set-top box, and this can be used to connect a more permanent external drive. If it's formatted with the JFS file system, the Topfield will let you record straight onto it (the same is true for USB drives, too).

You can transfer recordings from the set-top box to your PC by first copying them to an external USB hard drive, but the transfers will take a long time. Using a Buffalo HD-PE500U3 external hard drive, it took close to 20min to copy a two hour movie (5.6GB), which is over 15min more than it takes a PC to undertake the same transfer to an external drive, for example. You can't transfer a bunch of files at once, but you can continue to watch TV while transferring a recording to USB. The TRF-2460 has a built-in Web interface and FTP server though, so that you can upload and download programs to and from it over your LAN. This is a more efficient way of getting recordings off the PVR without using a hard drive. If you've got a fast wireless or a wired network, this is the way to go. 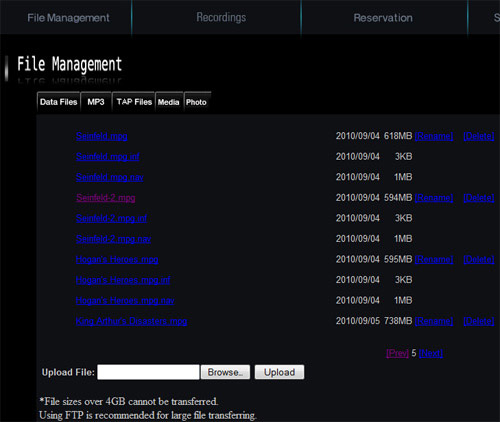 The Web interface is the most convenient way to get recordings off the PVR, and DivX files onto it.

Once you get the recorded programs onto your PC, you won't be able to play them using Windows Media Player because they are recorded in the MPEG2 TS (transport stream) format. To watch them on your PC, you'll need to get a player that supports this format. Topfield suggests KMplayer or you can convert them to MPEG2 PS (program stream) files in order to watch them through Windows Media Player. You can use a free program such as Avidemux to transcode the files into the MPEG2 PS format, but it's not an intuitive program to use and it will introduce audio sync problems — we had to use an audio adjustment of around -800ms to fix this.

The TRF-2460 also has some built-in Web services. You can use SHOUTcast to stream Internet radio stations and you can use Flickr to view photos. These worked perfectly in our tests. The YouTube function in the unit has been crippled by YouTube. While you will get shown a list of videos when you click on the YouTube feature, you will be met with an error message saying 'Cannot Download Media, Must Be Retry' if you try to play one of those videos. Comments from moderators in the Australian Topfield forum suggest that a future firmware upgrade (which will also add DLNA support to the PVR) may fix the problem, but it's also dependent on YouTube's specifications and licensing issues.

You can connect the TRF-2460 Masterpiece to a new big-screen TV using HDMI, or to an old 4:3 TV using Composite or Component connections. Digital audio via optical or coaxial cables is also supported. We tested the unit on a 40in Samsung Series 6 LCD TV via HDMI, and on an old (but still awesome) 68cm Toshiba CRT TV via a Composite connection. Even using Composite the picture was still crystal clear. We like the unit's remote control and the fact that it can control other devices, such as your TV, too, and channel changes were quick.

With so many great features and capabilities, the negatives (problems with YouTube, slow file transfers and a poor interface for playing media files) aren't too much of an issue. It's a sensational PVR that's easy to operate and you can watch files off a USB drive or listen to Internet radio when there isn't anything on tellie that's worth bothering about.

The front panel of the TRF-2460 is clear and informative.