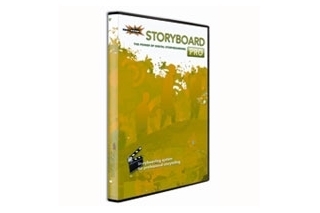 Storyboard Pro is a user-friendly program that allows you to draw, animate and distribute professional looking storyboards with very little know-how. Filmmakers and artists within the industry should find it to be well worth the asking price.

Nine times out of 10, the difference between a good film and a great film will come down to the pre-production phase. Meticulous preparation is the key to a successful shoot, with a detailed storyboard one of the most essential ingredients. To this end, Toon Boom Animation has developed Storyboard Pro; a digital storyboarding application tailor-made for professional storytellers. It allows you to draw visual representations of shots from the ground up, as well as animate key sequences. (For traditionalists, the program also lets you scan in your own pictures and drawings.) It will mostly suit independent filmmakers who want a fast and cost-effective way to plan their shoots, as well as storyboard artists looking for a streamlined transition into the digital era. Naturally, it will also double as a great presentation tool when pitching ideas to financial backers.

Despite being handicapped with a silly name, Toon Boom has earned a respected pedigree in the 2D animation industry; with the recent Simpsons movie largely created using the company's advanced software. With that being said, Storyboard Pro is very much a pre-production tool designed for conceptual purposes; those looking for a fully-fledged animation program would be better off looking elsewhere.

Using Storyboard Pro is a relatively simple affair for anyone versed in cinema language. Veterans of Adobe Flash and After Effects will find the interface vaguely familiar, although the tools on offer (and the ways you use them) are actually quite different. Thankfully, the included manual is well laid out and easy to understand, allowing you to quickly get your head around the basics.

The Toon Boom storyboard layout is made up of Shots (the main frame in a shot) and Panels (additional frames, when applicable, in the same shot). A variety of notations can be added to each frame, with dedicated text fields for dialogue, action notes and technical comments. You can even record audio from within the program and then sync it to your storyboard sequence. This is an incredibly useful feature when it comes to electronic distribution, as it allows you to add detailed descriptions or music/FX. (Completed storyboards can be exported in a variety of different movie formats, as well as PDF files.)

When it comes to creating a panel, StoryBoard Pro comes equipped with a host of innovative drawing tools, including ink, crayon and airbrush modes for achieving different styles. As you would probably expect, the program is compatible with tablet PCs, allowing you to sketch out panels with a stylus pen. For those after quick results, a sizeable library of templates is also offered, allowing you to add backgrounds, actors and props with a few simple mouse clicks. You can also implement camera movements, such as pans, dolly shots and tilts, by selecting the relevant template and dropping it into the sequence (either as a visual indicator, or an actual animation). This makes StoryBoard Pro accessible to practically anyone, with no limits set by artistic or technical ability.

One exceptionally handy tool is the Preview function, which allows you to watch sequential shots in order and adjust the time between frames. This is particularly useful for animated sequences, with any applied motion templates playing out in real time (thus giving a rudimentary indication of the finished product). This is a great way to 'test' proposed sequences before you shoot them – often, something that looks perfectly fine on paper will fly in the face of cinematic convention. An animated preview makes such anomalies a lot easier to spot.

With an RRP of over $1000, Toon Boom Storyboard Pro will not be in the price range of the average Trop Fest hopeful. This is a serious application designed for serious users – only established storyboard artists and independent filmmakers need apply. With that being said, anyone with enough money on their hands will find it to be well worth their time.