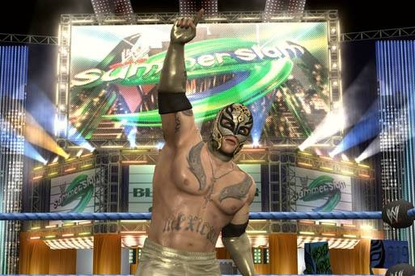 SSmackdown vs. Raw 2010 has managed to stay fresh and appealing by authentically recreating the WWE experience and providing a bevy of tools to support user generated content and community.

The Smackdown vs Raw franchise is quickly becoming the Madden of pro wrestling. With a yearly release cycle and a juggernaut reputation, it's on its way towards establishing itself as the premier video game wrestling series. But rather than coasting on its own momentum, the way some past Madden titles have, Smackdown vs Raw 2010 continues to up the ante with more of everything fans love about the series and then some.

THQ's Smackdown vs. Raw series has become a staple video game sports franchise, garnering an extensive fanbase of rabid pro wrestling diehards. But that diehard following comes with a price: namely, pull-no-punches criticism when things go awry. Fortunately this year's iteration has much to offer where user generated content, creativity, and sharing takes center stage and it's sure to please franchise fanatics who want another excuse to climb into the ring.

The most touted addition to the franchise is the new Story Designer mode which allows you to create your own ongoing drama filled episodes of WWE programming. At your disposal are a multitude of options for crafting the perfect episode of Monday Night RAW, from scripting the opening promo to setting up a sneak attack on a superstar to soften them up for their upcoming bout. You can use created wrestlers as well and it's satisfying to take virtual versions of your friends and put them through the WWE soap opera wringer. This is the sort of depth the series needs and will increase the longevity of the game exponentially

Create a wrestler is as robust as ever while creations can now be shared online for download, something inept face morphing artists like myself have longed for. With the community sharing feature, I can just download the best Jake "The Snake" Roberts and "Ravishing" Rick Rude models instead of painstakingly creating my own.

And it's a good thing they streamlined the sharing feature because it's painfully obvious that THQ is shuttling the vast majority of pro wrestling legends to the Legends of Wrestlemania series. Outside of a small handful of exceptions, this year's roster is made entirely of current WWE competitors. I understand the decision-they want to keep it focused on the current roster-but I'm sure the old school fanbase will complain.

Still, there's a lot to like about Smackdown 10. The fantastic Road to Wrestlemania mode, for instance, is back, once again allowing you to play through unique stories for popular WWE personalities and your own created wrestler. This year's version is even better than last year's as the story arcs and writing are exactly on par with, or better than, what you'd see on an actual episode of Monday Night Raw. Voice acting, which once sounded tinny and painfully obvious it was recorded in studio is better than ever. Extra special props to Edge for turning in a performance fit for a king; his "girlfriend voice" is laugh-out-loud funny.

SSmackdown vs. Raw 2010 has managed to stay fresh and appealing by authentically recreating the WWE experience and providing a bevy of tools to support user generated content and community. It doesn't reinvent the wheel with new gameplay mechanics or revamped graphics, but WWE Smackdown vs. Raw 2010 excels once again as the definitive pro wrestling game on the market. Fans of the series and pro wrestling alike should definitely put it in their queues.