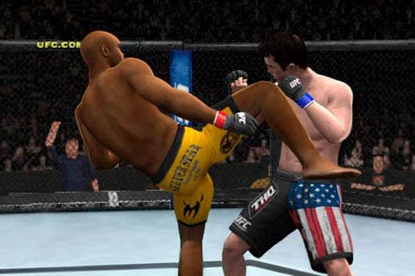 Don't let this one's small stature fool you: UFC Undisputed 2010 on PSP packs nearly as big of a punch as its console brethren, allowing you to bust noses and break arms with all your favourite fighters, moves and modes.

UFC Undisputed 2010's console edition is -- bar none -- the world heavyweight champion of MMA games. Granted, the game kind of snatched the throne by default, but it hardly slacked its way to the top. Deftly combining the blood, sweat, and tears of a very complex sport with a considerable dosage of glitz and glamour, it's one of the best tools in the UFC's promotional arsenal. So clearly, its portable version's tiny fighters have some pretty big shoes to fill. This can't end well, right? Wrong, actually, because UFC Undisputed 2010 on PSP is -- shockingly enough -- a near-perfect complement to its console cousins.

The game's presentation has definitely taken a hit in the jump to a smaller, weaker platform, of course, resulting in lower visual fidelity and an audience made up of about ten cardboard cutouts. Combined with hollow sound effects and the conspicuous absence of Joe Rogan and Mike Goldberg's commentary, it feels less like you're trapped in the Octagon with a real, flesh-and-blood genetic monster man and more like you're playing with tiny UFC action figures.

But that's not to say that those action figures aren't a blast to play with. Undisputed's sometimes mind-bogglingly complex combat system has made the jump fully intact, and even though the game's complexity means you'll probably get your butt unceremoniously kicked back to the tutorial screen a few times, the control scheme feels right at home on the PSP. The wide arcs needed to pull off transitions and submissions mean even the analog nub's infamous imprecision isn't really an issue here. Better still, all of 2010's refinements to the combat system are at your disposal, so clinching, Randy Couture-style dirty boxing, and a dizzying array of submissions and reversals are all completely viable.

Similarly, THQ pulled a "honey, I shrunk the console version" on Undisputed 2010's entire mode selection, with Ultimate Fights and career mode being the best of the bunch. If you're a UFC nerd, Ultimate Fights will take you down a particularly violent section of memory lane, challenging you to recreate classic UFC fights right way down to when and how they ended.

That, however, is just a gift shop novelty compared to Undisputed's incredibly deep career mode. As with the console version, you don't get an all-expenses-paid trip to the UFC. Instead, you have to work your way from lowly amateur to household name by training your created fighter, learning new moves, and developing strategies to cope with numerous fighting styles. So basically, it's about as close to the real thing as you'll get without having to nurse a bloody nose afterward. And unlike traditional fighting games -- in which a loss may as well be a Game Over -- losing is simply a reality of the sport in Undisputed's career mode. Combined with cut-scenes and actual characters in your fight camp, it feels like, you know, an actual fight career -- and not just a sports game with an RPG sloppily duct-taped on.

Really, beyond the obvious presentational issues, all that keeps Undisputed's portable edition from going toe-to-toe with its console counterpart is online multiplayer. There's ad-hoc, of course, but reaching out to someone thousands of miles away and punching them is sadly not an option. Even without it, though, Undisputed 2010 on PSP gives you plenty of bang for your buck, and unless you absolutely must see every high-def sweat droplet and hear Mike Goldberg's every pronunciation mistake, we can't recommend it enough. Two swollen, disgusting cauliflower ears up!