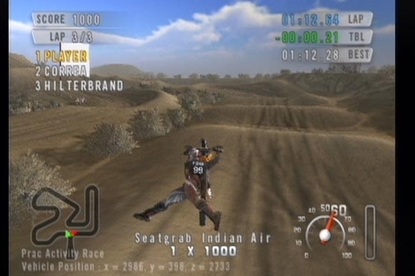 Untamed is a pup past its prime. The multiplayer mode holds potential overall but the uninspired off-road racing and bland presentation means you should only consider it if you're a die-hard franchise fan or an off-road racing junkie.

MX vs. ATV Untamed proves that you can't teach an old dog new tricks. The latest instalment of the dirt-worn racing series throws every conceivable motorbike, four-wheeler, and buggy together in an attempt to capture the genre's pole position. Unfortunately, Untamed doesn't do anything particularly well choosing ease of play and a glut of content over innovation and superior quality.

Mud In Your Eye

On the plus side, the game is instantly accessible thanks to simple controls and forgiving handling. You'll find it easy to jump right into the driver's seat of the large roster of vehicles and take off across the many venues. There's an impressive list of events for you to tackle, as well, including: super-cross, freestyle, open-cross, super-moto, endurocross, mini-moto, and way-point runs.

Unfortunately, Untamed suffers from a lot of problems. The first is that the terrain exerts little influence on your handling, which makes the game easy to play but robs you of a sense of challenge and realism. Any sense of difficultly comes from the computer controlled racers who will give you a run for your money at the higher difficulty settings and the freestyle trick contests, which suffer from finicky button combos and landings.

Sadly, these issues carry over to the multiplayer modes. Untamed does, however, soundly beat back competing racers in terms of options: full split-screen, system link, and online play via Xbox Live across any of the events featured in the single player game. It truly is the game's one bright point.

Untamed also lets you customise your vehicles and riders, but it's entirely cosmetic since equipment has no impact on performance; this means you'll spend more time playing dress-up than anything. While it's a nice touch, we would have preferred it if they focused on letting you actually affect your vehicle's performance through upgrades and tweaks.

The game also suffers from some presentation issues. There are long loading times and while the practice arena that they dump you into is a novel approach, running circles inside an empty indoor arena while waiting for a race to start is not our idea of fun. The graphics also underwhelm, with a last-gen flavour that falls far below the standard set by marquee titles Sega Rally Revo and MotorStorm. There's little variation in terrain, vehicles don't leave persistent tracks in the mud, and a plastic sheen covers nearly everything.