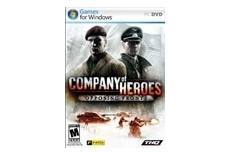 Few expansion packs come loaded with as many new features as Relic has seen fit to put in -- two entirely new sides, an equal number of expansive campaigns, and enough potential multiplayer action to keep any player occupied for months. With that said it's not hard to recommend Opposing Fronts to either returning veterans or eager newcomers; both will find something new and exciting waiting for them on top of an already stellar base.

When it was released last year, Company of Heroes was met with universal acclaim, with good reason. It brought to the forefront some of the most innovative RTS concepts milling about, and combined it with the hackneyed and humdrum Second World War setting to create a genre-defining classic. A little more than a year later, Relic has released the first expansion, bringing two new armies to the field, two new campaigns, plenty of maps -- and most importantly -- a hell of a lot of fun.

The largest addition that Opposing Fronts brings to the original game is the inclusion of two new sides: the German Panzer Elite, and the British Army. The Panzer Elite are largely focused on the vehicle side of things, but they do eschew the heavy tanks for tank destroyers like the Marder III, and light vehicles such as armoured cars. Almost all of their units can be upgraded or specialised in some way, giving this side far more customisation than perhaps any other in the game. The British, however, are more constricting. They go into battle with only three mobile command trucks to call on for construction, and therefore are notably restricted in their unit makeup. What the British do excel at is taking and holding territory, having a natural edge towards defensive with powerful entrenchment abilities, such as slit trenches. While more expensive one-for-one, most of the British units can fight off more than their numbers if supplied with some of the leader units that are made available to the player that enhance the default abilities and strengths of British units.

It's good that both sides are designed so well, because you'll be spending a lot of time with each in the two single-player campaigns. In the first campaign, you command elements of the Panzer Lehr division defending against British and American forces during Operation Market Garden. This is followed by a second campaign following the British as they move to take Caen during the initial Normandy campaign. Together, the two campaigns are just slightly longer than the campaign provided in the original game. The missions themselves are of a good mix, rotating between hard fought defensive operations, hill captures, and city fighting; the only disappointment being that some of the maps are reused as the campaigns go on.

Also included are many smaller features, such as upwards of a dozen new maps suitable for skirmish and multiplayer usage, offering a good variety between dense urban fighting and the rural surroundings of France and the Netherlands. On the sound front, Relic has once again done some excellent work in both voice acting and sound effects. Likewise, their have been some minor -- but noticeable -- visual enhancements like the new exquisite storm effects. All of the new units adhere to the high standards Relic set for themselves, and the British in particular have received their own specialised personality, as their units show their stuff against those "wankers" and "jerry bastards".