Thinkflood's infrared transmitter turns your iPhone into a universal remote We do like the idea of using your iPhone or iPod Touch to control one or more home theatre setups within your home, but Thinkflood's RedEye Remote Control System has too many drawbacks.

In theory, smartphones make the perfect universal remote: they are almost always on you, many have touch screens, and their Internet connection means you can update your app to suit any additions to your home theatre arsenal. Unfortunately, smartphones lack the RF and infrared (IR) connectivity required to communicate with these devices. ThinkFlood's RedEye Remote Control System attempts to solve this conundrum by translating Wi-Fi signals from your iPhone or iPod Touch into infrared signals. While it's easy to configure, we think you'll be reaching for the original remote after no more than five minutes of using this system.

The RedEye Remote Control System consists of a cheap-looking, plastic iPhone dock, power adapter and dock adapters to suit both the iPhone and iPod Touch. To set it up, just download the free RedEye iPhone app from the App Store and connect to the unsecured wireless network transmitted from the bundled dock.

On the app's launch, you'll have to add a room to identify the RedEye dock, and then add each device in that room. The app will look for a preconfigured set of infrared commands for each device, though we had no luck finding configurations for the televisions and media players we used. Instead, we opted for manual configuration, which involves pointing the original remote at the dock and teaching it each button as individual commands. Even here, the success rate wasn't 100 per cent, as the dock failed to recognise all button presses from multiple IR remotes.

Once configured, commands sent from the RedEye iPhone app will be transmitted to the dock via the wireless network. They are then translated and sent out as infrared commands to the relevant home theatre component. Due to this process, there is a slight lag after issuing a command from the iPhone, particularly when doing a repetitive action like increasing volume. However, it definitely works. 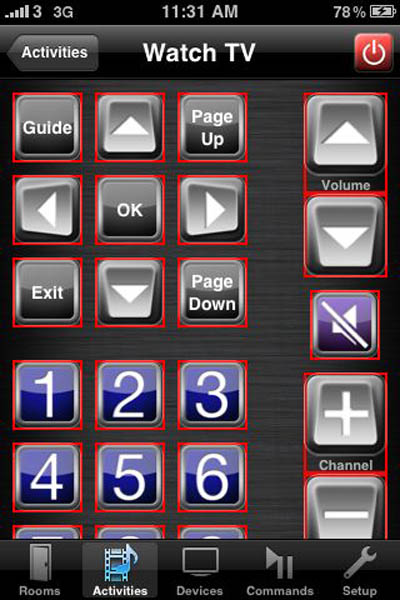 Those accustomed to Logitech's Harmony universal remotes will no doubt be familiar with the RedEye app's "activities" feature, which allows you to initiate multiple functions on multiple devices with a single touch (for example, turn the volume up on your amplifier and switch on the TV at the same time). Entering an activity also brings up a graphical virtual remote, which has a customisable button layout that can be as simple or as complex as you like. You can even assign accelerometer flicks and multi-touch gestures to each function, though we found responsiveness to these was sporadic during use. You can set up a virtual remote to control individual devices as well, but the system can be complicated and tedious to set up.

Then of course, there's the dock itself. Anyone who has ever become frustrated with a non-responsive remote control will likely know that infrared requires line of sight in order to work. This means that the bundled dock must be positioned in a way that it has an uninterrupted view of the front of each of your home theatre components. A setup like this is surprisingly difficult to accomplish with the RedEye accessory, and mounting the dock on the ceiling is an unsightly prospect. In fact, there's no real need for the dock itself, since all commands are transmitted to the accessory wirelessly.

Though we haven't tested alternative universal remote solutions like the Re IR accesssory and L5 Remote, their use of an adapter that connects to the iPhone rather than a standalone accessory seems like a better design.

Thinkflood's RedEye Remote Control System is a nice concept, but it is ultimately let down by an unwieldy dock and a disappointing app. Better solutions might one day transform the iPhone and iPhone Touch into the perfect universal remote, but for now we'll stick with dedicated solutions.