Good performance at a reasonable price 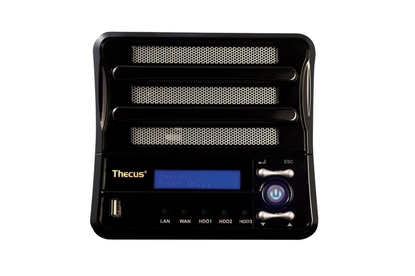 The N3200 is slower than some other drives on offer, but its performance was about same as a four-drive Iomega StorCenter 150D. It offers innovative functions and is easy to use. So considering the fair price, the Thecus N3200 is a clear winner that offers good value for money.

The Thecus N3200 is a RAID drive that offers good performance at a reasonable price.

Pitched at both home users and small businesses, the Thecus N3200 offers a good combination of price and performance. Its three-drive set-up may look odd (most RAID systems are based around even numbers of drives), but for a RAID 5 or RAID 0 array any number of drives over two will work fine.

For RAID 1 the Thecus N3200 is not great, though, because you either have to mirror all of the drives, or have one non-mirrored separate drive, which isn't ideal. The use of three drives keeps the overall cost of the unit down compared to four-drive models, although the overall maximum capacity is, of course, reduced.

The rest of the raid types, up to RAID 6 offer more complex and intelligent arrays, balancing speed and performance. RAID 5, using the Thecus N3200, enables all drives but 1 to be functioning. So if a single drive fails you can replace it without losing any data.

In that way, the three drives offered by the Thecus N3200 makes a lot of sense. You get the combined speed and storage of two drives, with a third acting as a spare to improve reliability. It's extremely unlikely that you'll lose two drives at once, so this system should provide foolproof backup.

Setting up the Thecus N3200 was hampered by poor naming of its two network ports. The rest of the set-up process using the Thecus Setup Wizard was painless, and the N3200's web interface is notable for being easy — no mean feat considering how many functions it has. Some of the functions are Windows only, but in general there's a lot on offer. Other innovations include the ability to attach a webcam for a simple in-studio security system, and an eSATA port on the back for adding additional storage.