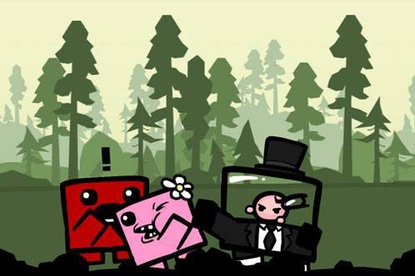 As I write this, I've completed just 34% of Super Meat Boy. I'm struggling toward the last level of the main game, I've dabbled in the Dark World, and I've gathered a fragment of the game's numerous bandage collectibles. I've barely scratched the surface, and I feel like I've played more than an entire game's worth of content. Oh, and I've died 2,136 times.

I've considered quitting, but despite the fact that I've suffered so many defeats, Meat Boy's blissful 2D platforming won't let me go. This is a game for patient players or those willing to put up with punishment: Super Meat Boy lights short fuses with a flamethrower, and yet, the made-of-meat main man is too much fun to fling around for me to walk away.

The amount of content crammed into this downloadable game is also downright alarming — I'm obsessively collecting bandages so I can replay each level with the uniquely powered unlockable characters. The levels themselves literally number in the hundreds, and the significantly more challenging Dark World stages present additional stages to conquer during the main game. Discovering hidden vortexes in certain stages also throws interesting things at you, such as various old school renditions of Super Meat Boy, or stages designed around unlockable characters' abilities.

The mounting frustration of Meat Boy's increasingly brutal difficulty also instils a simultaneous sense of cathartic release and exhausted relief when you finally overcome a map. You resort to a lot of trial-and-error but there's a definite payoff that can't be discounted; of course, on the flip side, the sheer unbridled rage you feel when you miss a jump can be a bit of a downer, but it fades the instant you restart and move onto the next attempt. The masterful — or diabolical — placement of threats and enemies adds an interesting challenge to the already tough-as-nails levels. Each stage demands perfect timing, judgement of angles, and memorisation of the complicated patterns of the changing environment.

Whether fireballs roll at you like Donkey Kong's barrels or the trusty floor beneath your feet vanishes Mega Man-style, Super Meat Boy keeps things fresh by turning back time. Even the basic story is as classic as they come: some jerk stole your girlfriend-are you a bad enough blob of beef to get her back? It's the surprisingly modern winks and nods that excited me most, though. The Canabalt-inspired aesthetic in a few later levels would have been enough to make me content, but the Portal-esque portals, which opened new challenges in already cleverly designed worlds, are just icing on the cake.

The phrase "love letter" gets tossed around a lot when someone describes a fantastic new game that's built around an older era's ideas. GamePro used it to explain 3D Dot Game Heroes' nods to NES classic The Legend of Zelda, or to note Red Dead Redemption's reverence to Western cinema. This is an effective way to detail what debts a game owes and how it pays it back. As I played through Super Meat Boy, I discovered that "love letter" isn't the most accurate definition for its accomplishments as homage. Super Meat Boy is a thank-you card addressed to great game design. It recognises and embraces everything we've come to love about the indie scene, even going so far as to include it — Braid's Tim and Gish's Gish, for instance, show up as playable characters. And all the while, Super Meat Boy's creating an experience equally deserving of this sort of high five.