Tapping to the beat of life 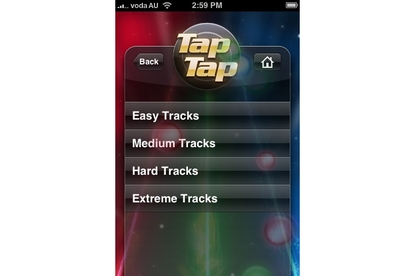 The makers of Tap Tap Revolution are back with a sequel that refines and indefinitely improves the rhythm-based iPhone game. There are a few problems with the implementation of the new tilt gameplay, but Tap Tap Revenge remains a must-have for the iPhone 3G.

For most Australians, the name Tap Tap Revolution won't ring any bells. But for those daring enough to import and jailbreak a first-generation iPhone, the name is likely to be incite some excitement. Combining the ever-popular rhythm gameplay mechanism with the unique control systems afforded by the iPhone, Tap Tap Revenge continues the legacy forged by its predecessor, adding a number of new gameplay modes. There is little we can find to fault this game, but the original game's 'create new beats' mode is sorely missed.

The game's premise is quite simple — use the iPhone's touch screen to tap out the beats of a song as cued by orbs of red, blue and green light sliding towards you. The notion of building a game entirely on rhythm has proved popular in established franchises like Dance Dance Revolution and Guitar Hero. Tap Tap Revenge simply adapts this idea to the iPhone's unique control options. The result is a game that's simply too fun to pass up.

Tap Tap Revenge offers both one and two-player modes and a range of songs categorised into four difficulty settings, ranging from Easy to Extreme. As difficulty rises, the number of beats increases, and the game introduces a tilt-based control which requires the player to tilt the phone at the right time and in the right direction. The mechanism adds a new layer to the gameplay. However, while holding the iPhone in one hand and using the other to tap out the beats, tilting to either side is often very awkward, and tilting forward or back isn't as sensitive as it could be. This gameplay mechanic also makes it impossible to play properly while the phone is on a flat surface. Thankfully, this annoyance doesn't appear too often and isn't part of the two-player mode.

At the moment, the choice of tracks is rather limited, but the game's producer, Tapulous, is constantly updating its database of free downloadable tracks. The original Tap Tap Revolution allowed players to 'create new beats' by tapping out a rhythm to any song in their iPhone's music library. However, restrictions placed on third-party applications from the App Store means this version doesn't offer the option. Don't expect to tap out the beats to the latest chart hit either. Tapulous is a tiny software company and can't afford the royalties for mainstream songs, so Tap Tap Revenge uses a small (albeit well selected) database of songs from independent artists.

Apart from the game's tilt mechanic, there's little to fault Tap Tap Revenge; at least, not much that could actually be fixed by its developers. It's simple, it's multiplayer and it's free — the key ingredients of the perfect iPhone game.