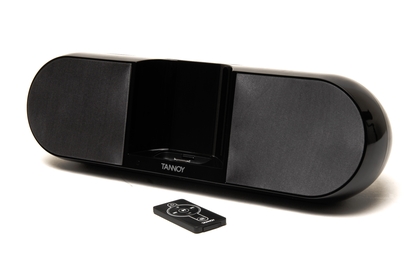 If you aren't listening to dance music or something requiring a ton of punchy bass, and think you can manage to hang on to the i30's remote, this is one of the best iPod docks on the market. Do keep in mind though that it isn't cheap.

The audio space is a very strange microcosm in the technology world. There is basically no price cap on what you can spend and the majority of people making the best equipment are not known by the public at all. Tannoy isn't quite that high end, but they are known for producing great quality mid- to high-end speakers and have been doing so for many years. So when the company's first effort to breach into the lucrative iPod dock market arrived on our doorstep, we were eager to take a look.

For the most part the product impresses, however, there are a few niggling issues that stop it from being truly great. The most obvious of these is the control mechanics. A rather flimsy plastic remote handles all the basic control elements which is fairly standard, but as there are no buttons to be found on the i30's body, if you lose the remote you're left with a rather useless albeit stylish lump of technology. We understand that aesthetically having no buttons is far more pleasing, but even a tiny row of controls underneath or on the back would suffice.

That said, if you manage to keep a hold of your remote, you'll be extremely pleased by the overall performance of the i30. While it doesn't quite match the quality of other Tannoy speaker products, it is definitely one of the best sounding iPod docks we've ever heard.

The most noticeable thing about the audio is how strongly separated the vocals are. They are pushed well forward from the rest of the music, which gives a lot of definition and clarity. Some may find this a little disconcerting but it really helped place emphasis on the singer who is often drowned out by the heavy bass on other units.

On the i30, the bass wasn't overpowering, in fact just the opposite; at times it could have used a little more power. It extended deeply and was quite slow which gave it a thick, rich sound, but it lacked a little impact that may be felt in faster, more bass-oriented styles like dance.

However, the other musical elements were brilliantly rendered, with sweet highs and a strong, detailed mid-range which makes it particularly good for rock tunes. There is great balance between the different ranges and the general sound is extremely smooth. The brilliant separation seen in the vocals extends to most other parts of the music, which creates a nice soundstage despite being a simple two-speaker device. Overall, audiophiles will probably still not be impressed by the i30; the sound could be a little tighter and more controlled, but as far as iPod docks go, it is one of the best out there.

While external controls aren't present on the unit, it does have several other funky things, including an auxiliary input for other music players and a USB connection to synchronise your iPod with your PC while docked. As you'd expect, your device will also charge when docked and there are a large variety of inserts to support different iPod iterations.

Aesthetically the i30 is very smooth, with a slim round shape and a gloss black colour scheme. It will look right at home in a modern lounge-room setting thanks to its minimalist design.