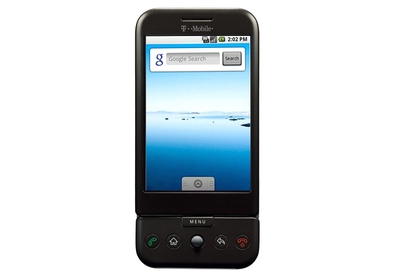 The HTC Dream build quality is okay, and you need to be very wary of the dataplan small print, but Google Android and its myriad apps make the T-Mobile G1 a winner.

The Google Android applications on board the T-Mobile G1 are by far the coolest feature of the handset, especially Google Maps Street View, which on the T-Mobile G1, allows a person to view a snapshot of an entire street scene at any of several US cities.

We chose 42nd street in New York City at the Avenue of the Americas from Google Maps, and once the information downloaded from Chunghwa Telecom's mobile network, we were able to view the street on the T-Mobile G1's screen. It's cool.

There are three ways to navigate a street scene using Google Android on T-Mobile's G1, or the 'Dream' as HTC calls it.

The most fun is to hit the "compass" function on the T-Mobile G1 and move it around by hand. You pan the G1 up and view the screen as if it's the LCD viewfinder on a digital camera, and you're looking at building tops or into trees. Pan down and you can see if anyone dropped some coins on the street. Pan around for an entire 360 degree view of the street from where you are, including taxis, buildings, or a guy walking down the street eating a sandwich.

We can't think of any useful reasons to use the T-Mobile G1's Street View — Google Maps is enough to get you where you want to go — but it sure is fun.

The other two ways to navigate on Street View are by using the T-Mobile G1's touch screen to look around or the trackball at the bottom of the phone.

Google is still expanding the Street View database to include more cities.

The Google Android applications aspect of the T-Mobile G1 may make it one of the most expandable handsets around. You can already find fun and useful programs from Android, many of them free. And applications are easy to find and download.

An icon on the desktop of the T-Mobile G1 sends you right to a Google Android apps page, where applications roll across a panel at the top of the screen. You can use your thumb on the touch screen to make the panel move left or right for more choices and then tap an app's icon to choose it.

We picked ShopSavvy because the demonstration of it looked fun and we wanted to see it in actual use. Bargain hunters will love this program.

ShopSavvy turns the T-Mobile G1's on-board 3Mp camera into a price tag scanner. It starts to scan immediately when ShopSavvy is on, no need to snap a photo or anything. Just run a red line in the middle of the viewfinder over a barcode and it scans the information.

It took us a few tries to scan the barcode of the book Execution by Larry Bossidy, which was one of the few things at HTC's office with a barcode. But once we got it, it only took several seconds to navigate to a site with a book review and other information, as well as suggestions on where to buy.

The ShopSavvy application only took about 40 seconds to download. We also downloaded Pac-Man, which took about 33 seconds.

The T-Mobile G1 itself feels good, solidly built and with beautiful screen quality. Even when you flip up the screen to reveal the qwerty keyboard below, it's quick and smooth in a way you can tell it won't break easily.

We can't say we are wild about the T-Mobile G1's overall design. It's a bit thick and industrial, especially compared to HTC's last major release, the HTC Touch Diamond, which is beautifully crafted.

But unlike the HTC Touch Diamond, which is made of a clear plastic that's a bit slippery, the T-Mobile G1 has more of a rubberised feel for easier handling.

The face of the T-Mobile G1, when the QWERTY keypad isn't showing, is mainly the touch screen, which looks like it's about 3in, with five navigation controls at the bottom, including the trackball in the middle.

Navigation on the T-Mobile G1's touch screen is smooth and the software responds quickly to tap commands. The trackball, also works well, but took a bit of getting used to.

The keypad is easy to use (even with big thumbs), but we didn't have a chance to actually type out a message. We did make a phone call, which is easy to do and the voice quality is clear.

One warning to sound out to anyone interested in the T-Mobile G1 (Dream) handset is to take care on your choice of mobile phone service providers.

The only service provider today is T-Mobile and some fine print on their website betrays a stingy allowance on data services: "If your total data usage in any billing cycle is more than 1GB, your data throughput for the remainder of that cycle may be reduced to 50Kbps or less".

For a Google Android handset designed for the internet, with so much downloadable software applications from Android's Web site that are heavy on data usage, as well as music downloads from Amazon and online videos from YouTube, it seems likely users will need more than the 1GB allotment.

More likely than not, other service providers will launch a version of HTC's Dream as well. They may offer better terms.

T-Mobile's G1 will first be available in the US on October 22 for US$179 with a two-year contract and subscription to a limited data plan for $25 a month or $35 for unlimited data access. T-Mobile will release the G1 in the UK in early November and other European markets in the first quarter next year.

The T-Mobile G1 is currently only available in English, but translation into other languages is already underway, an HTC representative said. It will take six months for the handset to be made available in nearly all languages.