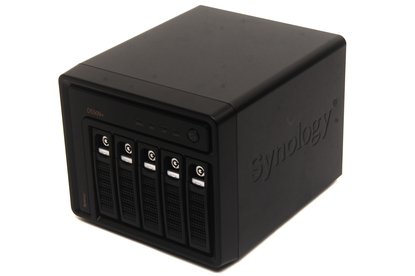 Synology's five-bay NAS device is suited to both homes and businesses, offering fast performance and up to 10TB of storage. If you need to store a lot of data, the DiskStation DS509+ is definitely one to consider.

Synology's DiskStation DS509+ is a great value network-attached storage (NAS) device with five drive bays — letting you store up to 10 terabytes of data, though you'll have to supply your own drives. It offers fast file transfers and a wealth of security and business-focussed features, making the DiskStation DS509+ NAS worthwhile for small to medium businesses.

The DiskStation DS509+ NAS device's five drive bays are exposed at the front, making for a functional but not particularly attractive piece of kit. The bays are individually lockable and can be hot-swapped if a drive needs to be replaced. Drives can be configured in a basic or JBOD array, as well as RAID levels 0, 1, 5, 5+Spare and 6.

Unlike most NAS devices in this price range, the DiskStation DS509+ lacks a front-mounted USB port and one-touch copy button. All connections are on the NAS device's back panel: two USB, one eSATA and two Gigabit Ethernet ports. The USB and eSATA ports can be used for connecting external hard drives, though the NAS device will only recognise drives with ext 3, NTFS and FAT32 file systems; as usual, there is no support for drives using Mac OS X's HFS+ file system. The DiskStation DS509+ offers 802.3ad link aggregation support, which means the Ethernet ports can be used in tandem to balance network traffic over one IP address or to provide redundancy if one port fails.

We test all NAS devices by connecting them through a Gigabit Ethernet network to a testbed PC with a 300GB Western Digital Velociraptor hard drive. We run Intel's NAS Performance Toolkit, which determines how the NAS device performs when streaming 720p high-definition media from the device as well as the ability to record the same video while performing backup operations.

We also run two file transfer tests to see how the NAS device performs in the real word. One file transfer test uses 3000 1MB files; this is intensive for both the hard drives and the embedded processor, and a good test of how it will perform when backing up your computer. We also transfer 20GB worth of 3-4GB files, a faster test that is similar to dealing with large videos, disk images or database files.

Though competing against NAS devices equipped with 1.2GHz and 1.6GHz processors, the DiskStation DS509+ performed remarkably well in our benchmark tests. In Intel's NAS Performance Toolkit it outperformed most NAS devices we've tested, while the only competition in our file transfer tests came from Netgear's ReadyNAS models and QNAP's ridiculously beefy TS-809 Pro Turbo NAS. Put simply, the DiskStation DS509+ delivers great bang for your buck when it comes to performance.

The DiskStation DS509+'s Web-based interface provides comprehensive options that should be easy to change even for inexperienced users. The NAS device supports Windows (SMB), Apple (AFP) and Linux (NFS) network protocols, as well as FTP and HTTP/HTTPS file server capabilities. Data can be backed up to external hard drives as well as to other Synology or rsync-capable servers.

Home users will be able to set up streaming for DLNA-certified UPnP players and iTunes clients. Alternatively, you can use the Web interface's media browsers for accessing photos and audio. The audio browser is particularly impressive: it can play music from the NAS, connected iPods and Internet radio stations. It can even output audio directly from the NAS device through USB-connected speakers. It doesn't recognise an iPhone or iPod Touch connected via USB, but users can download Synology's DS audio and DS photo iPhone apps to access photos and music.

Synology has recently updated its user interface for NAS devices to version 2.2, offering a slew of new features. These include an iSCSI Target feature, which lets you access the NAS device's storage volume through an iSCSI server. Synology has also added a software firewall and Auto Block, which bars IP addresses after a predetermined number of password failures. We would still like to see volume encryption, but these new features make the DiskStation DS509+ a more desirable and certainly more secure NAS device for businesses.

If the comparatively low price point isn't enough to entice, the fast performance, comprehensive features and iPhone compatibility should certainly give home and business users alike reasons to consider the DiskStation DS509+.