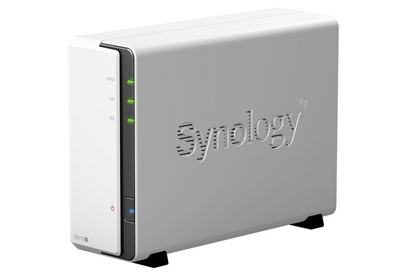 The DS112 turns the whole premise of a traditional NAS on its head. It is more of a mini server than a storage repository. The flexibility of cross-platform design and compatibility with Mac, PC and Linux is commendable and seamless. Even finicky iTunes and Time Machine systems performed flawlessly on this non-proprietary hardware.

The Synology DS112 is a single-drive network attached storage (NAS) device that actually has three siblings, all of which are aimed at slightly different markets. The baby is the DS112J, which is aimed at the SOHO market; the DS112 reviewed here is aimed at advanced home and workgroup setups; and the DS112+, in distinctive black, targets SMEs. The primary differences between the units are a CPU frequency bump, as well as an increase in onboard RAM.

In the enterprise, a network storage device (NAS) is usually implemented to allow for a centralised and managed pool of storage, while leveraging the performance and security of multiple drives in a RAID configuration. RAID 5 is perhaps the most popular implementation due to a good overall balance of cost, performance, storage capacity, data security and management.

So I was initially a little perplexed as to why there would be a market for a single drive NAS device, which brings with it the complexity of needing network infrastructure, without the benefit of RAID redundancy. Its use soon became apparent after I set up the device and was greeted by the Synology operating system: DSM (or Disk Station Manager).

Running through a Web browser, DSM provides a sophisticated virtual desktop environment through which the NAS can be easily configured and controlled. More importantly, DSM provides a Linux-based kernel that transforms the unit from being a "dumb" storage device to an applications server, allowing multiple apps and desktop plug-ins to run independent of any desktop.

Impressively, it allows the unit to provide a plethora of services from mail server (POP3, SMTP & IMAP), to print and Web server hosting, as well as cloud, multimedia and surveillance services. Most impressively, the media server supports iTunes and DLNA, and it's Xbox 360 and Play Station 3 friendly. And it does backups, too. In a mixed platform environment, the Synology really shines in terms of flexibility and compatibility; it'll work with Apple systems and Time Machine, as well as PCs and Linux, with whatever client software one may configure.

In this respect, the DS-112 is not a traditional NAS. It is competing with products such as the Apple Time Capsule and to a lesser degree the Mac mini Server, while positioning itself to work nicely with Mac, PC and Linux, and offering media services to Xbox, Play Station, Android and iOS devices.

In this way, it allows a central repository for a household or a small workgroup to easily share files and media across platforms, whilst still offering data security in terms of automated backups and value added services such as remote access using cloud concepts.

Equipped with two USB 3.0 ports and one eSATA port, the unit is able to back itself up to external storage, as well as transfer data from many external sources to the internal storage or to Synology's cloud system. Indeed, it is the Cloud Station facility that was of most interest to this reviewer.

Using the DS112 in the medical technology field

Working in the medical technology field, compliance of medical record confidentiality is all but an obsession in the United States and Europe, with emphasis on the US model of the Health Insurance Portability and Accountability Act (HIPAA). Australia is not so far behind with these draconian requirements, which effectively mean that all information repositories must be secured and encrypted. While this may be an obvious necessity (it has, however, been observed that many people voluntarily disclose more information on Facebook than to their GPs!), we encounter a hurdle when healthcare professionals start to use smartphones and tablets. Here information is not encrypted, and there is a very real danger that if the device is stolen or lost, then the confidential data is also at risk.

To this, many ITCE managers have pointed to "cloud" technologies. However, solutions such as Dropbox and iCloud also have no guarantee on encryption, nor physical security. It is also doubtful that these companies would go through the rigmarole of becoming physically HIPAA compliant and employing appropriate encryption technologies.

The Synology ecosystem, however, provides an inkling to a potential solution. By registering the NAS to the Synology Cloud service, the IP of the device is served up on a free DNS. Remote devices can then access the data securely from the DS112 without any intermediaries. It is in effect, your personal cloud, your own way.

Synology has also released all the APIs and SDKs to interact with their DSM-compatible devices, so there are already a few apps on Google Play and iTunes which are tailored to the unit. Effectively one may even "roll your own" app to tap into the DS112.

Also of note is the Web server capability that has support for PHP and MySQL, as well as blogging systems such as WordPress. In a true test of the Web server's capability, we transplanted our practice management software, which is reliant on PHP and SQL, without a hitch.

Testing the unit with a 3TB version of Western Digital's new RED series drives, which are purpose-built for SOHO RAID solutions, the DS112 produced a respectable download rate of 60 megabytes per second (MBps), peaking at 90MBps in large file (4GB) transfers. Uploads, as expected, were slower with transfers averaging 30MBps, performing slightly better at 50MBps with large files.

The DS112 turns the whole premise of a traditional NAS on its head. It is more of a mini server than a storage repository. The flexibility of cross-platform design and compatibility with Mac, PC and Linux is commendable and seamless. Even finicky iTunes and Time Machine systems performed flawlessly on this non-proprietary hardware.

The ability to add custom-written services and apps further enhances the value and usefulness of this unit to corporate departments, as does the ability to use the unit for mail, Web and cloud servers. Unfortunately, virtualisation is reserved only for Synology's larger corporate offering, however, it's probably not an issue or a feature that is important for the target market. What is perhaps important to prosumer and SOHO users is the excellent support for media services with iTunes and DNLA integration.

In all, the DS112 is a brilliant solution to anyone looking for a plug-and-play mini server solution without the technical administration. With a recommended retail price of $219 it is good value for money, especially if you shop around.

Note: we recently conducted a Synology competition in which users had to tell us how winning a Synology NAS device would increase their office productivity. The winners of these NAS devices (including the author of this user review) kindly agreed to review these devices to further illustrate how they will be using them for their day-to-day work.