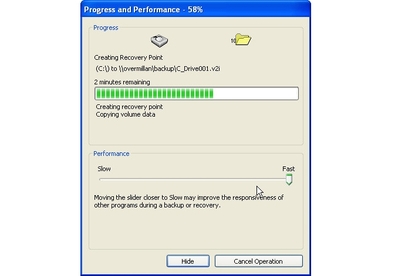 If you’re after a backup application that doubles as a system restorer, the new features help make Ghost 10 a worthwhile upgrade – even for existing users of version 9.

Anyone that's ever lost data from a hardware failure knows how frustrating - and depressing - it can be to have to rebuild lost files, emails, tax information and contact lists from scratch. Though PC experts have banged on about it for years, backup is something that most users don't consider or perform regularly - until a hard disk crash. Though it has historically been positioned as a disk tool, Symantec's long-standing Norton Ghost product has been updated to do double duty and handle backup duties as well.

Ghost 10 functions under Windows and can perform a number of its tasks without rebooting. The box includes a copy of Ghost 2003, which was the last version to run natively under DOS, so legacy users aren't left out in the cold, either.

The user interface is top-notch, and the application presents a wizard to help guide you through creating a regular backup schedule. The program's pretty flexible, and you're free to choose network drives, optical media including CDROM or DVD, or either a secondary or external hard disk as a place to store the backups. The initial backup takes a while - around 15 minutes for 4GB of data - but from that point forward it's quick. Each subsequent backup adds to the previous one incrementally, so the software only modifies the files that have changed between backups. This greatly streamlines the backup process as it means you don't have to take separate snapshots each time. The application runs as a process on the taskbar, and does its job in the background while you're performing other tasks.

All the backup increments are added to the original archive, and AES 128-, 192-, and 256-bit encryption is fully supported to help protect sensitive data. Though it's of lesser concern for backups on secondary drives, it's a godsend for anyone storing data on a removable hard disk or optical media. A browser allows you to peruse the contents of older backups and restore individual files or folders as required.

Though the backup application is useful in its own right, the installation CD also ships with some other useful tools, including a Copy My Hard Drive feature for duplicating one drive onto another (handy for upgrading disks). Another elegant feature is the ability for the installation disc to double as a bootable recovery CD in case of serious error. The recovery interface closely mirrors Windows and it can be used to restore a backup and give you a functional system.

The only real limitation of the software is its inability to store individual files or folders as separate backups. It's designed as a drive imaging tool, and that's how it works - Ghost takes a snapshot of an entire disk partition and stores it for later. As a result, it demands a generous amount of storage space.

The limitation is a minor one, though, as there are myriad file-level backup applications on the market already. If you're after a backup application that doubles as a system restorer, the new features help make Ghost 10 a worthwhile upgrade - even for existing users of version 9.