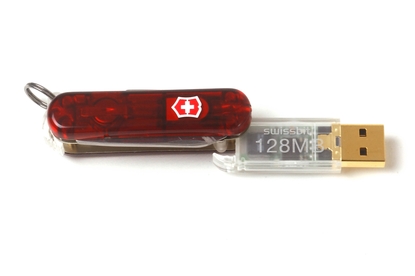 Fans of Swiss Army products will love this one and with good reason. Solid design and innovation make it well worth adding to your key ring.

The Boy Scout within us all longed for a Swiss army knife when we were kids, but the children of today are far more tech-savvy and the simple knife has undergone a modern overhaul. That wide eyed little kid can now join techno-geek big kids with the new Swissmemory USB Victorinox from Swissbit.

This model comes equipped with a 128MB USB flash drive which works flawlessly and is easily extended from the unit. It is compatible with both Windows and Mac OS and appears as a removable drive, which means just plug it in and it's ready for use. 128MB is plenty of storage space for the transfer of smaller files between two computers but wouldn't be enough for music or movies. The package comes with Securelock software so you can protect your data from being erased and secure it from prying eyes.

The hinge on the Swissmemory is slightly loose but it sits in the USB slot without any problems and fits at a 90 degree angle parallel to the PC case. The unit obviously comes with the standard retractable knife but is also equipped with a pen, nail file, flat head screwdriver, scissors and a red LED light.

As with most of these styles of knives, the accessories aren't good for regular use and tend to seem like a bit of a novelty but they do their job well enough. The unit is very cute, finished with a transparent red outer casing and emblazoned with the Swiss Army Knife logo that we all know and love. The Swissmemory USB Victorinox would make a techno-cool and convenient addition to the key ring while also adding an edge of style. It is available in sizes up to 1GB.