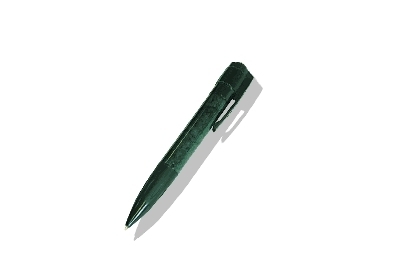 With mediocre image and sound quality combined with poor battery life, the Pencam is a very expensive toy.

We guess we should make the obligatory James Bond comment since we're reviewing a spy camera of sorts, but given the quality the Swann Pencam produced, we'll pass this time. If Bond had relied on the Wireless Pencam, he wouldn't have lasted very long.

The Wireless Pencam is designed to look like a pen and transmit both video and audio to a remote location. First, the good news - this really does look like a pen. It's a little thicker than most, and a slightly larger, but it will pass a cursory glance. Not only does it look like pen but it actually functions like one too, so you can write with it as normal (you will notice a little extra weight if you do). To the casual observer, this is just an ordinary pen and even unscrewing it may not reveal anything at first glance. The top of the pen doesn't unscrew, only the bottom - and even after that you have to remove the case to reveal the battery compartment. Still, for all intents and purposes, the Pencam will not attract undue attention if kept in a pocket or left on a desk.

The tiny camera on the Pencam has been placed on the shirt clip, allowing you to sit the unit in your pocket while in use. The camera itself is not particularly noticeable, although if someone is looking for it, they will find it.

The Pencam works by transmitting a wireless signal to a base station. This base station is quite large and has two RCA connections, one for mono audio and one for composite video, which can be plugged into a television or compatible recording device. The base station also has an AC adapter and needs to be connected to a power source to work.

When we first connected the Pencam, we had to configure a channel on the base station before we could pick up an image. At first, we were impressed with the both the image and sound quality - but this was because we were standing right in front of the base station. As we moved further away, (but still kept the base station in sight) the picture and sound quality started to deteriorate. The picture especially began to blur as wavy lines an white noise appeared across the screen. However, even in this state it was still viewable.

This problem worsened as soon as the signal was interupted by walls with the wireless stream dropping in and out intermittently, rendering the audio all but useless. While Swann has stated a range of 60 metres on the box, we found the Pencam unusable well before this stage. In fact, at times we had problems picking up the signals from 10m-20m away with a single wall in place. We did try and angle the base station so as to improve the reception and while this helped in some cases, the difference was minimal.

Another major issue with the Pencam was the battery life. You have two options with battery - either using four small 1.5V batteries that slip inside the pen, or an external 9V unit that attaches via a cable. The small 1.5V batteries are of course preferred, since they can be concealed inside the pen, but the life span is terribly short. To connect the 9V battery, Swann has provided a second pen case, with a tiny hole in it for the power connecor but we found this cable to be fragile and hard to remove when needed. Also, the 9V battery only provides 6 hours of battery life, meaning you can't leave it on a desk and go home for the night.