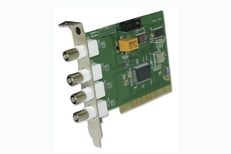 At this price point the package is quite a bargain when you consider that an IP camera solution will end up costing in excess of $1500. Our only concern relates to the security access issues.

The Swann PC DVR 4 NET Security Guardian is a PCI card that allows you to simultaneously record the footage from four security cameras - note the software is expandable to record up to 16 cameras, if your motherboard has the capacity for this. The card allows you to record audio as well as video, which it captures at a rate of 25fps (frames per second) in PAL mode, at a resolution of 352x288.

Installation is simple, and the software allows you to monitor your desired location in several different modes which are all easy to configure. The Security Guardian software allows you to adjust the motion sensitivity of your cameras. You can set the video capture so a limited amount of space is allocated to video footage, which will be continually rewritten over. Recording can be based on time or motion, and it is compressed into relatively small files; for example, in our tests, we recorded a double-speed, time-lapse 6 minute clip, at a resolution of 320x240, which created a 3.5MB file.

Security Guardian can also run as its own server, which means that you can log into it over the Internet and view your video streams remotely. However, to get this running you have to open the correct ports and disable many firewall and security settings. This can be done during the initial phase of installing Security Guardian's software and only needs to be done once. When configured properly, you will be able to use your ISP-given IP address (assuming you have a cable or ADSL connection) to log in to and view the cameras.

We do wish Security Guardian was a little more secure in the way it records footage onto your hard drive. As it stands, unencrypted .avi files are recorded into folders that are viewable and accessible to all who have physical access to your PC while it's running. We think encryption and password-protection for this footage is a standard feature that Swann should look to implement. This shouldn't be a concern for most people however, as any surveillance server should be locked away anyway.

The C-500R cameras have a 3.5-8mm lens with a manual iris and can capture at a resolution of 512x582, however this isn't fully utilised since the next highest resolution supported by the software is 640x480 with de-interlacing. The Bulldog cameras support a resolution of 500x582, and have 9 infrared LEDs (Light Emitting Diodes) that can create a clear picture in darkness up to about 10m. All cameras come with an ample amount of cabling.