At the promotional first-year rate it could make sense.

SurfEasy is a very basic VPN with fast speeds. The company's Windows app is in bad need of an upgrade, it's over priced after the first year and there's no easy way to pay anonymously for those who need it.

What a strange few years it's been for SurfEasy. Most people had never heard of the service until it was snapped up in early 2015 by browser maker Opera, and for a time it powered Opera's free VPN. Then in 2017 NortonLifeLock, when it was still called Symantec, snapped it up from Opera.

In all that time and with different owners, SurfEasy has barely changed. That's not necessarily a good thing as the interface is quite antiquated now, and at times the app can be a little infuriating with dropped connections. Still, it's speedy enough to remain one of the 10 fastest VPNs in our tests. 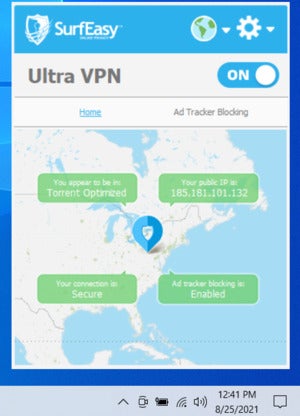 SurfEasy with an active VPN connection.

To change your VPN location click the flag icon in the upper-right corner. This reveals a list of all the various country locations you can choose from.

There isn't a lot in terms of extra features. No double-hop VPNs or split tunneling. SurfEasy does, however, work with U.S. Netflix. That was a big deal four years ago, but now it's becoming a more common feature on VPN services.

SurfEasy also blocks ads, and it offers a feature to automatically connect to the VPN when on Wi-Fi.

SurfEasy permits torrenting but this feature is only available on the SurfEasy VPN plan (formerly the Ultra VPN plan). To connect to one of those servers, you click the country list and then select the Torrent Optimized option. The only other critical setting that SurfEasy's app offers is whether to activate the VPN app on startup.

SurfEasy allows you to use up to five devices simultaneously, and there are apps for Windows, Mac, Android, and iOS. The website still claims it supports proxy extensions for Chrome and Opera, but if you dig a little deeper you quickly find out that those extensions are no longer supported.

SurfEasy costs AU$59.99 for the first year, covering up to five simultaneous connections, and there's a 14-day money-back guarantee. After that first year there are two options for renewal pricing on Windows. You can pay AU$77.88 for the SurfEasy VPN plan that includes five simultaneous connections and no region limits. Alternatively, there's the Total VPN plan, which costs AU$47.88, covers the same number of devices, but has a more limited region option. There are also month-to-month plans if you only need a VPN for a short time.

SurfEasy at one time was one of the fastest VPNs we tested. It still remains in our top 10 (albeit the lower half), but its speeds aren't as impressive as they once were. In our tests, SurfEasy retained 38.1 percent of the base speed compared to 55.28 percent four years ago.

Your experience with SurfEasy—or any other VPN—may vary depending on your ISP, router, device, and connection type.

As we saw four years ago, SurfEasy has connection issues. Last time we reported how the connection would stall for a few seconds after initial connection. This is still happening, and really there's no excuse for these continuing issues.

Another important thing to note is that every SurfEasy server we used was running in Amazon's cloud.

To sign up for SurfEasy the company requires an email address, and those who wish to could use a pseudonymous email address. That won't get you very far in terms of anonymity, however, as SurfEasy does not offer any significant way to pay anonymously or semi-anonymously. All payments are handled via a credit card or PayPal. There are no options for paying in cash or with cryptocurrencies like Bitcoin.

SurfEasy is part of NortonLifeLock, the latter is based in Tempe Arizona and the CEO is Vincent Pilette.

As for SurfEasy's privacy policy, it's okay but not great. The policy says the service does not log your browsing and internet activity, but it does log your IP address for the purposes of delivering the content in accordance with your device(s) and determining the appropriate language settings for communicating with you. NortonLifeLock says it also logs your device name and type, OS version (mobile devices only), and aggregate bandwidth usage. It also collects some diagnostic data that you can read about in the privacy policy.

To sum up, SurfEasy has not changed in any substantial way in four years. A charitable explanation would be to say it's in maintenance mode, but it sure feels more like benign neglect. If you need a cheap VPN for a single year, and you don't mind the privacy policy, it's quite a good deal. For nearly AU$50 or AU$80 after that, though? No way. This VPN is simply not competitive at those prices compared to what you can get elsewhere. It has no significant features to speak of, continues to have connection issues, the website has some inaccurate information, and the app is not great. The VPN performance is still fine, though not as good as it once was.

If all you're looking for is a good connection to watch Netflix, or you need something cheap for that first year then SurfEasy could work for you. After that, we cannot recommend it at the prices the company is charging.