Beefy server in a 1U frame 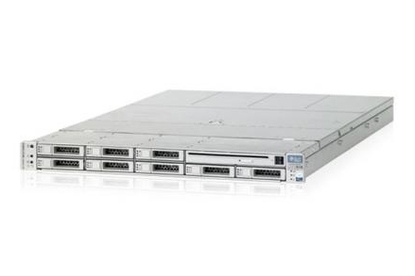 The Sun Fire X4150 is a "2U" workhorse squeezed into a 1U chassis. Sporting two quad-core Intel Xeon CPUs, up to 64GB of RAM and eight internal 2.5-inch 10K SAS drives, it's a monster of a system, blazing through database and Web serving benchmarks in the lab. Even the little details are there, such as internal USB 2.0 ports (in addition to two in the front and two in the rear), redundant power supplies, four built-in Gigabit Ethernet ports, and more. Thin is definitely in with the X4150.

Sun has developed a 1U chassis design that can handle an impressive number of drives, yet also provide for a standard two-socket Intel-based mainboard and the company's signature four Gigabit Ethernet interfaces, not to mention a relatively advanced Lights-Out Management coprocessor. The Intel-based Sun Fire X4150, AMD-based X4140, and SPARC-based T5120 and T5140 servers all look identical to the casual observer, but each offers a different take on the purpose of the ubiquitous 1U server.

I've had a Sun Fire X4150 in my lab for a few months now — running everything from Windows Server 2003 and Windows Server 2008 to CentOS 5.1 and VMware ESX 3.5. Overall, I've found it a quiet, capable server that tends toward the lower end of the power consumption spectrum. All in all, it's a very real competitor to HP's ProLiant DL360 G5, IBM's x3550, and Dell's PowerEdge 1950 III. In fact, the fit and finish of the X4150 are generally better than the rest of the field's and far ahead in local storage.

The Sun Fire X4150 in my lab is equipped with two Intel E5440 quad-core Xeon CPUs running at 2.83GHz per core and with 6MB of L2 cache per pair of cores. The X4150 can handle up to eight 2.5-inch SAS drives (mine has four 10K drives, 72GB each), 64GB of RAM (mine has 16GB), four Gigabit Ethernet interfaces, and three PCIe slots. This puts the X4150 ahead of the mainstream server pack, as the main contenders in this space generally offer a maximum of 32GB of RAM, and between four and six local disks. With the four built-in gigabit NICs, the X4150 not only saves a slot that might be used for more Ethernet interfaces, but it offers three PCIe slots — one more than HP, Dell, or IBM. In addition to those specs, the X4150 also sports two USB 2.0 ports up front, two in the back, and one internally — very handy for software licensing or to boot from flash.

Some of these features might seem overkill for a 1U server, which is widely believed to be fine for light duty, but not for tasks requiring real horsepower. It would seem that Sun doesn't buy into that theory. The X4150 is priced similarly to other servers of comparable spec, yet offers storage and I/O capabilities generally found in 2U and larger systems — this not only saves on rack space, but given the relatively low power consumption of the X4150, it can save on power as well.

On the other side of the X4150 is the Sun ILOM (Integrated Lights-Out Management) interface. This management coprocessor enables admins to remotely power-cycle the server, grab a local console, and perform other remote maintenance tasks. As in other Intel-based Sun systems I've seen recently, this management system doesn't quite measure up to the ILOM on the company's Opteron-based systems, due to little quirks in the remote KVM applet and somewhat sluggish performance. But it's fully equipped with SNMP support, remote media mounting capability, LDAP authentication, and more. There's no doubt that it's functional, though it's not as fluid as it could be. Of course, when comparing Sun's ILOM against the competition from HP and Dell, it wins on price alone — it's fully functional right out of the box, and doesn't require paid licensing to access extended features such as a graphical console session.

Although I've run several OSes on the X4150, I ran my stable of real-world benchmarks on the X4150 using a fully updated build of CentOS 5.1. These tests include bzip2 compression tests, md5sum tests, MySQL benchmarks, and LAME MP3 encoding tests. While some of these tests are single-threaded, they offer a solid look at the performance of the server in situations that occur in the field, not in a lab. For comparisons, I used a year-old Dell PowerEdge 2950 with two dual-core Intel 5160 CPUs running at 3.0GHz with 4MB of L2 cache per core. Though the Dell 2950 had the edge in clock speed, the Sun Fire X4150 has four additional cores, as well as an additional 2MB of L2 cache per core. In this way, it's possible to draw performance comparisons between the X4150 and the hardware running in many datacentres today. The results were mixed, depending on workload, but the performance increases found in the X4150 were substantial in several tests, specifically the database benchmarks.

My audio-encoding tests were simple: I ran the LAME MP3 encoding tool against an 838MB WAV file — the same one I've used in numerous server tests. Run with flags to produce a 256kbps MP3 with a VBR (variable bit rate) quality setting of 2, the Sun Fire X4150 produced a 152MB MP3 in 5 minutes, 34 seconds. The Dell 2950 accomplished the same task only a few seconds faster, with a time of 5 minutes, 29 seconds. As this is a single-threaded test, the faster clock speed of the Dell's processors is likely the reason for the slightly quicker time. Interestingly, when eight concurrent encoding processes were launched on each server, each process completed in exactly the same time as a single process — on both servers. It appears that the additional four cores in the X4150 don't necessarily translate into speedier concurrent processing, at least not in this test.

The md5sum tests showed similar results, with the 3.0GHz 5160 CPUs in the Dell PowerEdge 2950 besting the 2.83GHz CPUs in the Sun Fire X4150 by the slimmest of margins. The bzip2 compression tests echoed these results, with the Dell edging out the X4150 by a few seconds per test. None of these results were particularly surprising given the CPUs in use between the two systems, but they do illustrate that in some workloads, quad-core CPUs aren't necessary.

Quite surprising, however, were the results of the MySQL tests. I ran the standard sql-bench utility against the local system to gauge database performance. This is a series of tests that stresses nearly every database function, and is handy in determining real-world MySQL performance on a given server.

The SQL-bench tests were run on identical MySQL 5.0.22 database servers. The X4150 took just under 12 minutes less to conduct the full range of tests when compared to the Dell 2950 - just 678 seconds compared to 1,394 seconds for the Dell. This was quite impressive, and due in no small part to the fast local disk I/O. The U320 SCSI drives in the Dell suffered in reads and writes, while the SAS drives in the X4150 turned in an impressive performance, showing 250MBps reads to a RAID5 array in a separate set of tests. Undoubtedly, this accounted for the large disparity between the results, but even in less disk-intensive tests, the X4150 came out at least 50 percent faster. Thus, the X4150 immediately proved its worth in database applications.

To further test that conclusion, I ran my custom-made LAMP test suite. This is a PHP/MySQL application that hits a 500,000-record, nine-column database table, randomly alternating between dynamic pages with static pages to give a reasonably accurate picture of a real-world Web application's performance under load. With a test run consisting of 10,000 requests with eight concurrent requests, the X4150 handily beat the Dell 2950, pushing an average of 391 requests per second compared to 266 requests per second, translating into 20 milliseconds per request compared to 30 milliseconds for the Dell.

The most suitable roles for the Sun Fire X4150 will be in database, Web serving, and virtualisation tasks. In these spaces, the X4150 provides significant bang for the buck in nearly all respects.

NOTE: Pricing for this product starts at AUD $2555.00. For a full price list please follow this link