A quality headphone and microphone setup targeted at PC gamers 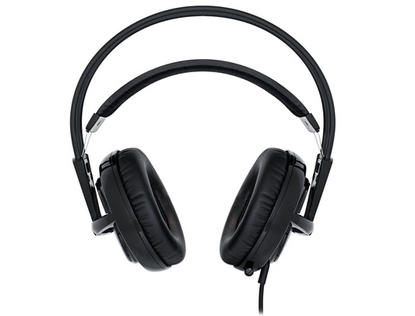 The Siberia v2 heat orange edition is a high quality headset that is both comfortable and stylish to wear. The only thing holding it back is its connectivity is limited to USB.

The Siberia v2 series forms SteelSeries’s line of closed, passive noise-cancelling headsets. The stock headset is available in a multitude of colours from the Danish peripheral vendor, but for gamers who want something slightly different, the heat orange edition is designed to fill that niche.

The heat orange edition comes with most of the same abilities and features as the other Siberia v2 headsets. Headphones have a frequency response of 18 – 28000 Hz and impedance of 40 Ohm, while the microphone has a frequency response of 50 – 16000 Hz and sensitivity of -38 dB. The closed headset design is meant to block out outside noise during use, and the ear padding is big enough to cover the ears fully. Despite the size of the headset, we found it to be quite light to wear on both the head and around the neck. The headband comes with a strip of suspended padding, which puts very little direct pressure on the head and makes it comfortable to wear.

The headset comes with a retractable microphone that protrudes from the left ear piece. The microphone can be easily pulled out of the ear piece and then flexed into any position in front of the mouth. Retracting it back in the earpiece is just as easy, which gives the Siberia v2 a consistent look when the user does not use the microphone. SteelSeries products usually come with dedicated software to make the most of the hardware, and this headset comes with the vendor’s Engine software. This software suite enables the user to easily change the equaliser settings based on what type of content will be consumed, such as video games, movies or music.

The appeal of orange

The customisable aspect of the headset is the LED lighting on the ear pieces, with the light intensity and pattern controllable through the Engine software. The heat orange edition comes with a warm orange hue powered by 16 LEDs, which makes its stand out from the other stock colour options in the Siberia v2 range. The default setting makes the headset glow when connected, and the LEDs flash depending on what types of sounds are played over the speakers. While the innards of the headset are uniform across the Siberia v2 range, the heat orange edition does manage to stand out thanks to its unique colour.

The headset is targeted at gaming, and to that end it comes with a USB connector. Both the headphones and microphone are integrated onto the single connector, so it is merely a matter of plugging it into the PC and it will get automatically recognised by the system. The stock cable is a bit short, but fortunately it comes with an included extension cable. The only issue with the USB route is that the usefulness of the headphones is limited. While the Siberia v2 works with USB enabled consoles such as PlayStation 3, it can not be used with portable music players or handheld gaming systems. Considering the robust audio and microphone performance, which we found to be clean and accurate, there was a potential for the Siberia v2 heat orange edition to be used away from the computer.