A great mouse with lots of bells and whistles 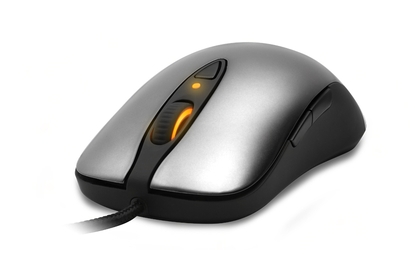 The SteelSeries Sensei is great mouse that will go good work both in games and in regular PC use. Some of its added features may be overlooked during normal PC use, but the overall mouse experience is still top notch.

In an earlier review, we had a look at the SteelSeries Sensei [RAW] Frost Blue gaming mouse. The [RAW] designation of that mouse referred to the stripped down nature of it compared to SteelSeries' Sensei, which is a premium offering within the Danish peripheral manufacturer’s mouse portfolio and more expensive than the [RAW]. Immediate differences compared to the [RAW] version include a different outer shell, multicoloured LED illumination, and an on-mouse LCD menu.

More of the same

From a design perspective, there were many things that we liked with the Sensei [RAW] that carry over to the Sensei. The Sensei has the same symmetrical design, which means it works well with both left- and right-handed gamers. The comfort is aided by the fact that the Sensei and [RAW] look and feel like the classic Microsoft IntelliMouse. The two clickable buttons and scroll wheels are comfortable to use, with an added DPI switch used to change sensitivity settings on the fly. The design and feel of the Sensei [RAW] was the most compelling reason to get it, and the same can be said for the Sensei.

However, the less than intuitive features of the Sensei [RAW] are also present. The Sensei comes with four programmable buttons that can be used for macros, with two buttons fitted on either side of the mouse and aligned symmetrically. Their placement, reasonably low and near where the fingers rest, is the same as the Sensei [RAW]; this placement occasionally leads to accidental clicks during frantic gameplay. The addition of macro keys to mice is more often a miss than a hit, so disabling the four keys and accessing macros from the keyboard is more manageable. SteelSeries is providing the macro key option for users that are keen for that sort of thing, but a fair amount of retraining is required to get the most out of it.

The Sensei comes with numerous improvements over the [RAW] that push it into the premium category and justify the added price. The white exterior of the [RAW] has been replaced with a silver one. We found the smooth surface of the [RAW] made it prone to slipping when sweating, though the slightly rough texture of the Sensei does a good job of overcoming this. The single blue LED has been replaced with a multicolour one in the Sensei, allowing the user to customise the illumination to any one of 6.8 million different colours. As with the Sensei [RAW], the colour and illumination pattern can be controlled via SteelSeries’ configuration software, which is also used to assign macros to the keys and set DPI sensitivity.

SteelSeries has taken the task of making the Sensei a premium product to heart, including a variety of features that border on overkill. For one, there is a 32 bit ARM processor that takes the load of processing movements away from the PC’s CPU. Several important calculations are made to ensure the accuracy and response of the mouse, but it's doubtful that this will turn into any tangible performance improvements on a modern PC (we didn't notice any difference during our testing). There is also an on-mouse LCD that allows customised bitmaps to be assigned for further customisation. However, since the LCD panel is located under the mouse, the user will likely never see it. These additions do not break the mouse in any way, but do not exactly help in justifying the added price.