Lufia: Curse of the Sinistrals

There's a lot to enjoy about RPG Lufia: Curse of the Sinistrals for Nintendo DS including cleverly designed puzzles and snappy character dialogue 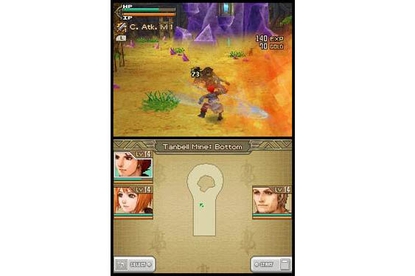 A commendable re-imagining of a 16-bit classic, Lufia: Curse of the Sinistrals is an enjoyable action RPG that sadly suffers from ill-conceived puzzles and botched balance issues.

Lufia: Curse of the Sinistrals could best be described as "uneven." It's a pretty daunting task to live up to a standard set by a genuine 16-bit classic, and it's clear that the developers behind this title had lofty aspirations. There are many points when the game absolutely shines, but there are also stretches of intense irritation. The end result is a nostalgia trip of a game that inspires some very conflicting feelings along the way.

Curse of the Sinistrals is based on Lufia II: Rise of the Sinistrals, a much-beloved SNES RPG. The original game was a traditional, turn-based RPG with elements of several other genres mixed in — Zelda-style puzzles, rogue-like dungeon crawling, even some basic critter-rearing — combined with a great cast and a story very sophisticated for its time. Curse of the Sinistrals is not so much a remake as a complete re-imagining of Lufia II. The game has been completely remodeled as a 3D action/RPG, with no remnant of turn-based combat left behind. While many key plot points from Lufia II remain the same, several characters have their designs and roles in the story heavily revamped. The effort required for such a drastic reworking of the source material is commendable — most remakes are happy to just re-do the graphics, add a few extra levels, and call it a day.

From the get-go, it's clear that there's a lot to enjoy about Curse of the Sinistrals. The action flows at a brisk pace from the opening stage, with easy-to-grasp action/RPG controls (hampered only slightly by the lack of a precise analog stick). Like in the original, puzzles litter the dungeons, many of which are unique and very cleverly designed. New gameplay elements are introduced at a steady rate over the course of the game, adding more depth to combat and augmenting your repertoire of potential puzzle resolutions. Character dialogue is snappy and enjoyably written even during the silliest of 16-bit-era plot contrivances, and the appeal of the game's central cast hasn't changed in the slightest.

Unfortunately, it's also clear from the beginning that there's a lot to be annoyed by. There are several cases where the solution to puzzles isn't obvious: the game sometimes neglects to tell you an important little detail, leaving you to lots of trial and error. The puzzles can be rendered unsolvable, necessitating use of an in-game "reset" function to take you back to a previous checkpoint. These checkpoints are often placed in terrible locations: if you're solving a puzzle that requires you to do 3 things, and you solve two and screw up the last, you'll be taken back to a point where you must repeat the first two as well. Ill-conceived mini-games are also scattered about to provide an unwelcome respite from gameplay you actually enjoy. The visuals, while excellent by DS standards, feel inadequate for the game. Muddy textures and bad camera designs can be a hindrance in finding important puzzle elements, resulting in more botched puzzle solving attempts. This doesn't feel like so much a design oversight as it is a compromise due to the limitations of the DS hardware — I can't help but think this title would have looked and played far better on the more powerful PSP or 3DS.

Then there's the botched balance. The game offers an option where, should all of your party die, you can restart from the last checkpoint boosted by five levels. It might sound like an option to "baby" less skilled players at first, but during some of the early enemy fights, it begins to look more and more like the option is there because the team couldn't figure out how to properly adjust the EXP/difficulty curve. Some of the boss fights in the first half of the game almost seem to require use of this option, and even then, it only brings the fights from "infuriatingly tedious" to "aggravatingly drawn-out."

Then, about halfway through the game, something changes. Gone are the overpowered enemies and frustratingly long boss fights as you get weapons that dispatch enemies effectively, a sensible level curve that doesn't necessitate dying, and a large roster of characters that lets you send another in when one's low on health. The puzzle design becomes consistently enjoyable, as do the boss fights. It's as if the developers finally hit their stride at the midpoint of the project, but weren't able to go back to touch up the earlier portions of the game.

Lufia: Curse of the Sinistrals does have a lot of fun elements, but it's also full of aggravations of varying sizes. I found that the parts where the game shines were worth the effort of slogging through its more lackluster elements, but I'm not sure how many other players will possess this sort of patience. While the work spent on renovating this title is impressive, the end result still feels like it needed more thought put into it.