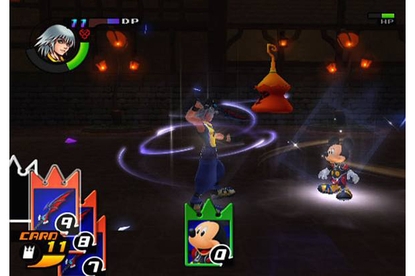 For people new to this title, Kingdom Hearts Re:Chain of Memories takes place during the timeskip between Kingdom Hearts and KHII. More importantly, the story sheds some light on the origins of Namine, Organization XIII, and why the heck Sora, Donald and Goofy were encased inside of weird bubble capsules prior to the events of Kingdom Hearts II. If you only played the PlayStation 2 KH titles, KH Re:COM ties everything together in one nice big (if slightly convoluted) package.

When Square Enix re-releases RPG games, they often tread a fine line between creating thoughtful remakes or hatred-inspiring rehashes. I'm happy to report that Kingdom Hearts Re:Chain of Memories, a PS2 port of a GBA game, falls in the former category — it's a worthy addition to the much beloved franchise as well as a compelling choice for diehard fans as it sheds some much needed light on events from past entries in the Kingdom Hearts franchise. Series noobs, however, might find themselves a little lost in the intricate plot that Kingdom Hearts has spawned thus far.

(Not) A Whole New World

At first glance, Chain of Memories looks a lot like the first Kingdom Hearts, but don't let its aesthetic overhaul fool you. One of the biggest differences between the two is the way the Disney-themed levels are mapped for Sora and company to explore. This time around, each stage is made up of a series of rooms connected through an overworld grid known as Castle Oblivion. The game's battles are still played out in real time as in past KH games but are treated with a card deck scheme, allowing you to choose separate cards for certain attacks and tactics, constantly switching out your cards in order to build the most effective deck for each encounter. Back-tracking through the Castle is also a cinch: defeated enemies don't respawn after their defeat, allowing you to take the time to level grind and explore secret rooms you may have missed the first time around.

Still, it's obvious that Chain of Memories didn't get as much polish as it could have. New cutscenes, while nice to look at, are sparse and mostly absent of voice acting, and the graphics aren't anywhere near the special effects madness that was present in Kingdom Hearts II. However, my biggest gripe with Chain of Memories was the frustrating lack of a coherent battle camera. Even though it can be manually adjusted with the analog stick, trying to do so while playing attention to hordes of Heartless and your card deck is a downright hassle. If Square Enix more or less fixed the rampant camera issues in Kingdom Hearts II, why couldn't they have spent some time programming those corrections into this release?

King of Hearts, Ace of Keyblades

Even so, the schizophrenic camera may be the least of your worries in Chain of Memories. Even on the easiest difficulty, this game offers a good challenge. At the other end of the scale, it's one the hardest action RPGs you'll ever play. Enemies will often appear in groups, and dodging in real time while choosing the right counter cards takes a fair bit of concentration. Personally, I feel like it's a HUGE step up from the lazy "hit the X button, rinse, repeat" combat of the original Kingdom Hearts. Building decks gets very addictive early on in the game, and with so many cards to collect there was a part of me that wanted to repeat certain areas just for the loot.

Even though it's not a wholly fresh experience, Kingdom Hearts: Re:Chain of Memories is definitely worth a try, especially if you didn't play the original GBA release. There's hours of gameplay in this title (even after beating it once) and the challenge alone should keep things interesting for both hardcore and casual gamers alike. With the series third instalment still a ways off and 2006's sequel a fleeting memory, Chain of Memories may be just what ailing Kingdom Heart addicts need to tide them over until the next release.