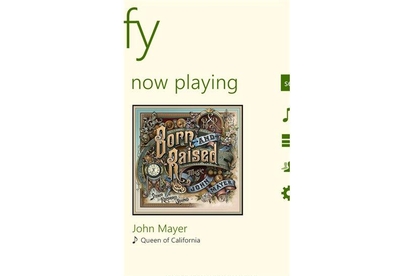 The debut of Spotify on Microsoft's Windows Phone 8 platform is welcome news for Windows Phone owners. It's a simple and well designed app but the lack of radio is a downside.

Our biggest criticism of Microsoft's Windows Phone 8 platform is the lack of third party apps available, but one of the most widely requested has just been released. Spotify for Windows Phone 8 is a simple, well designed app that provides access to all your music playlists.

The Spotify app predictably follows the standard Windows Phone 8 interface theme. Large, clean fonts are set against a light background, though unlike the Windows Phone 8 UI itself, there's no option to change this to a darker background.

The live tile that comes with the app is a nice touch and it can be resized to small, medium and large. When set to medium and large sizes, the tile flips and displays current album art for any tracks you are currently playing.

The main menu of Spotify for Windows Phone displays a search box and allows one touch access to your playlists, any play queues, your friends list and settings. The latter is a standard affair — you can choose to access the app in offline only mode, stream or sync in high quality and set whether you want to be able to stream over a 3G/4G network.

Swiping from the right of the main menu scrolls through the 'What's new' menu, which shows a selection of new tracks or albums that have been added to the Spotify service. Tapping on the album art icon will take you into that album or track and you can add these to a playlist or share them via Facebook, SMS or email. One notable absence is the radio function, which allows premium subscribers to listen to music that's selected based on similar tastes.

Overall, we found the Spotify app smooth and functional throughout testing, though it crashed a few times during use. This occurred more than once when we were attempting to download tracks to our phone. Annoyingly, the app needs to remain open when downloading tracks to your phone, so this process can't be completed in the background.