Sony Ericsson's first Android smartphone, the XPERIA X10, looks impressive but falls behind some of the strong smartphone offerings from competitors We really want to like the Sony Ericsson XPERIA X10, but as it stands, it has too many niggling issues to recommend. If Sony Ericsson upgrades its software to correct the performance issues then this will be a very impressive smartphone.

Sony Ericsson's XPERIA X10 smartphone is the company's first handset to run Google's Android operating system. The XPERIA X10 features Sony Ericsson's Timescape application, setting the phone apart from the abundance of other Android smartphones hitting the market. Though it's visually impressive, the XPERIA X10 has a few niggling faults that put it behind some of the strong offerings from competitors.

The first thing you'll notice about the Sony Ericsson XPERIA X10 smartphone is its enormous 4in display. Though it doesn't possess AMOLED technology (like Google's Nexus One and HTC's Desire), it's still delightfully impressive. Text is sharp and clear, colours are bright and crisp, and brightness is superb. The sheer size of this screen is a real plus and makes all tasks, from simply scrolling through the home pages to full blown mobile Web browsing, a joy.

The Sony Ericsson XPERIA X10's 4in display is sharp, crisp and clear, and makes the handset a joy to use

The Sony Ericsson XPERIA X10 smartphone is constructed largely of glossy black plastic, which sets it apart form other new phones in its class. Despite the absence of metal, the XPERIA X10's sleek, curved design feels great in your hand. However, its build quality is inferior to handsets like the Nexus One and the HTC Desire. The XPERIA isn't poorly constructed, but the use of plastic is a little disappointing — especially when you consider the price premium over the HTC Desire, for example.

The Sony Ericsson XPERIA X10 is largely controlled via its capacitive touch screen, though there are physical keys below the display for menu, home and back. A dedicated camera button and volume controls can be found on the right side, and there is a power button on top. The micro-USB port (used for both charging and synchronisation) is covered by an annoying plastic flap, but this does provide a more polished look.

The large screen means the Sony Ericsson XPERIA X10's on-screen keyboard has a lot of room, but this is one area where the iPhone remains supreme. Typing on the XPERIA X10's keyboard involves a steep learning curve; even after four full days of use, we were constantly typing a full stop instead of a space. We also encountered an annoying bug, with the backspace key would deleting all of our text rather than just a single character. The presence of haptic feedback and an excellent spelling correction tool are positives, as is the ability to choose from Sony Ericsson or standard Android layouts, but the iPhone's on-screen keyboard is far more polished.

The main feature of the Sony Ericsson XPERIA X10 is a custom interface overlay consisting of the Timescape and Mediascape applications. Timescape is a central timeline of events on both your phone and social-networking sites like Facebook. In a similar manner to the Motoblur UI seen on the Motorola DEXT smartphone, Timescape keeps a timeline of status updates on Facebook and Twitter and e-mails. However, it goes one step further than Motorola by also including communications and multimedia on your phone — missed calls, SMS and MMS messages, captured photos and videos and music. Each of these events forms 3D boxes that appear to be stacked on top of one another — the idea is that you simply flick your finger up and down the "spine" to scroll through everything. 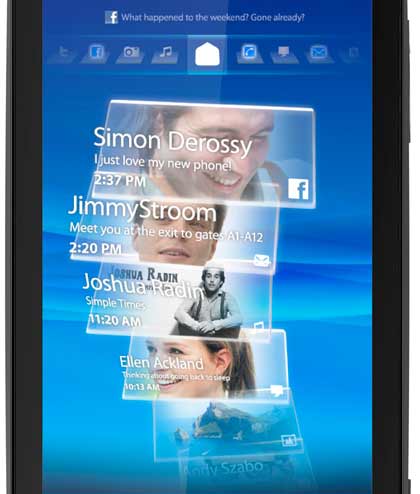 Timescape is a central timeline of events on your phone including Facebook and Twitter updates, e-mails, SMS messages, missed calls and captured photos.

Timescape looks absolutely superb — the graphics are crisp, the animations are modern and attractive and the layout is fairly simple and effortless to use. It's also very easy to sort the updates: simply flick your finger left or right to only see updates from Facebook or Twitter, for example. However, once you get past the pretty looks and animations, there are plenty of issues. Timescape is sluggish and often jerks when sliding from screen to screen. It's also limited in its use — although you can update your Facebook and Twitter status from the home screen itself, tapping a Facebook update took us to the mobile browser version of Facebook, rather than the Android app that we had installed.

There is also no way to automatically link your Facebook contacts with those in your address book — you need to link contacts individually and this is a time consuming process. Timescape also lacks some advanced features, such as support for multiple Twitter accounts and URL shortening when tweeting. If you have a Facebook account, you can get a handy online demonstration of Timescape.

The other application exclusive to the XPERIA X10 is Mediascape, which stores and plays all multimedia including music, videos and photos. Conveniently, you can access your online photos (such as Facebook and Picasa) through the photos menu and you can also download album art for your tracks over Wi-Fi. Unfortunately, there are no advanced settings beyond basic playlists, repeat and shuffle modes, but Mediascape still makes the XPERIA X10 one of the better multimedia Android smartphones.

Underneath Timescape and Mediascape, the Sony Ericsson XPERIA X10 offers the regular features and functions of Android, including the Android Market for third-party apps, an excellent notifications taskbar and automatic and seamless synchronisation with Google services. The phone automatically synchronises your Google calendar, mail and contacts over the air. The included browser looks superb on the large display, but the XPERIA X10 doesn't support Flash or multitouch technologies. Despite running the same 1GHz Snapdragon processor used in both the Google Nexus One and the HTC Desire smartphones, the Sony Ericsson XPERIA X10 feels sluggish in comparison.

The XPERIA X10 is currently running the 1.6 firmware of Android, and not the latest 2.1 version. Sony Ericsson has confirmed the XPERIA X10 will be upgradeable to 2.1 in the coming months but has not set a date. We can only hope this fixes the lag, bugs and missing features we encountered during our tests.

Other features of the Sony Ericsson XPERIA X10 include an 8-megapixel camera with autofocus and flash, a built-in accelerometer, a digital compass and a GPS receiver. The X10 also has a microSD card slot for extra storage, located behind the rear battery cover. Battery life is about what we expected and on par with the iPhone 3GS — the XPERIA X10 will barely last a day with push e-mail, location services and background data enabled, but should last a full 24 hours with some of these settings turned off.

The Sony Ericsson XPERIA X10 will launch on Telstra, Vodafone and 3 in May, but can also be purchased outright from online mobile phone store MobiCity.