Sony Ericsson XPERIA Play review: The smartphone has excellent controls and a smooth gaming experience, but the XPERIA Play will ultimately live or die by its exclusive games content 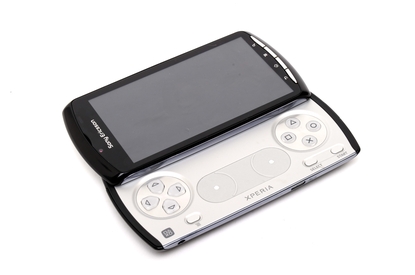 The Sony Ericsson XPERIA Play possesses excellent gaming controls and offers a relatively smooth user experience for both communications and gaming. However, it will ultimately live or die by its exclusive games content, and it has a few faults that prevent it from being a great device.

The gameplay experience obviously differs from title to title, but games we played on the XPERIA Play were smooth and fast. A small issue is the fact that PS One games are displayed in a 4:3 ratio, meaning they don't fill the XPERIA Play's widescreen display. You can zoom in, or stretch the game to fill the screen, but this results in a loss of image quality; we preferred to live with the black bars on either side of the screen.

If a phone call comes in while you are gaming, the game automatically pauses, and returns to a pause menu screen once the call is finished. The included stereo speakers on the XPERIA Play are excellent and easily among the best we've heard on a smartphone.

The Sony Ericsson XPERIA Play's 1GHz processor with Adreno 205 GPU, along with 512MB of RAM seem somewhat low for a dedicated gaming phone given upcoming smartphones like the LG Optimus 2X and Samsung's Galaxy S II sport dual-core processors, but this didn't seem to affect performance. The XPERIA Play has a paltry 380MB of available internal memory, so most content will need to be stored on a microSD card — both the microSD card and the SIM card can be removed without taking out the battery.

Sony Ericsson has promised to have 50 games available when the XPERIA Play launches, including Tetris, Madden NFL 11, Need for Speed Shift, Assassins Creed, Uno, Real Football 2011, Nova 2 and Splinter Cell Conviction. However, the XPERIA Play will live and die by its gaming content, so it will need a wealth of exclusive PS One titles to prosper. 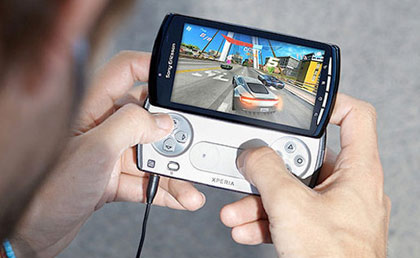 Games on the XPERIA Play are downloaded and accessed through the 'XPERIA Play' and the 'PlayStation Pocket' apps.

The XPERIA Play also includes Sony Ericsson's Timescape application, which first appeared on the XPERIA X10 Android phone. Timescape groups social networking and phone communications into a single, graphically intense interface; each communication event on the phone forms a 3D box that you simply flick your finger up and down the "spine" to scroll through. Thankfully, Sony Ericsson has included Timescape as a regular app rather than integrate it into the XPERIA Play's UI. This makes it unlikely to suffer the same Android software update delays as the XPERIA X10 did, and easily removable should you not wish to use it.

The Sony Ericsson XPERIA Play is slick and relatively fast to use, though it lacks the pure speed of the dual-core powered Motorola Atrix Android phone. We really like Sony Ericsson's minimalist UI overlay — though it doesn't offer the same deep customisation of HTC's Sense (seen on the Desire and Desire HD Android phones), it has five home screens for live widgets, handy folders that enhance shortcuts and a main menu that can quickly arrange apps in various orders, including most used. Disappointingly, the on-screen keyboard is small and cramped, and there was no default option to revert to the more spacious, standard Gingerbread keyboard; even if this is easily downloadable from the Android Market.

The Sony Ericsson XPERIA Play has a rear 5-megapixel camera, but it can't record HD video. It comes equipped with a 1500mAh battery — for the average user, this means you should easily be able to get more than 24 hours of juice out of the XPERIA Play before it needs a recharge. Sony Ericsson promises five and a half hours of gaming battery life.

The Sony Ericsson XPERIA Play will be released in Australia between May and June, and will be available though all carriers including Telstra, Optus and Vodafone. Pricing is yet to be announced.