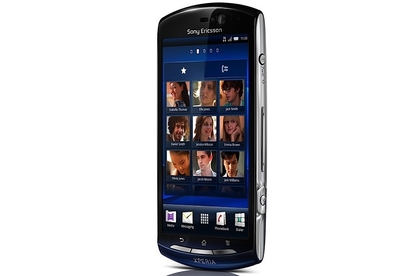 The Sony Ericsson XPERIA Neo can't claim the XPERIA Arc's unique design, or the XPERIA Play's dedicated gaming controls, but it offers a similar feature set including an excellent camera and a HDMI-out port.

Sony Ericsson's XPERIA Play and XPERIA Arc Android phones may be the company's flagship models of 2011, but there is another Sony Ericsson offering that has slipped quietly under the radar: XPERIA Neo. Geared towards entertainment, the XPERIA Neo has a built-in HDMI-out port, an Exmor R camera sensor and uses Sony's Bravia graphics engine that promises smoother video playback.

Read our smartphone showdown between the Sony Ericsson XPERIA Neo vs. the Apple iPhone 4, and check out the best upcoming smartphones in 2011.

The Sony Ericsson XPERIA Neo features a similar design to the disappointing Vivaz smartphone. Its all-plastic casing is described by Sony Ericsson as 'human curvature' — the rear of the XPERIA Neo curves toward the top, bottom and sides. This rounded shape makes it easier to hold, and the glossy plastic finish feels smooth in your hand. Annoyingly, the XPERIA Neo doesn't sit flat on a table or desk due to its curved shape, though its smaller size makes it more comfortable to hold and use than larger alternatives.

We appreciate the design of the XPERIA Neo, but it suffers the same flaws as Sony Ericsson's other XPERIA handsets, the XPERIA Play and the XPERIA Arc. The Neo's build quality could have been improved with the use of higher-quality plastics; the glossy surface is tough to keep free of grubby fingerprints, and the rear battery cover feels flimsy and creaks when pressed. Our review unit also quickly developed light scratches, suggesting the XPERIA Neo will quickly show its age.

The Sony Ericsson XPERIA Neo's Android shortcut buttons on the front of the handset (back, home and menu) are thin and lack a backlight. We loved the addition of a camera button, which is raised and easy to press, and the positioning of the volume button in the middle of the right side of the phone makes it easy to access one-handed.

The Sony Ericsson XPERIA Neo Android phone has a 3.7in capacitive touchscreen with a resolution of 854x480, and includes the same 'Reality display' technology featured on the XPERIA Arc. The XPERIA Neo's screen has excellent viewing angles, is bright and clear and has reasonable sunlight legibility, though the lack of an automatic brightness setting is a downside.

The XPERIA Neo may have a smaller display than the Arc and Play, but it is powered by a similar 1GHz processor and a notable 512MB of RAM. This helps to make it slick and fast during day-to-day use. Sony Ericsson's minimalist Android UI overlay — the same seen on both the XPERIA Arc and Play — is also a positive. Although it doesn't offer the same deep customisation of HTC's Sense (seen on the Desire and Desire HD Android phones), the XPERIA Neo has five home screens for live widgets, handy folders that enhance shortcuts and a main menu that can quickly arrange apps in various orders, including most used. Disappointingly, the XPERIA Neo has a small and cramped on-screen keyboard, and there is no option to revert to the more spacious, standard Gingerbread keyboard. Thankfully, this is easily downloadable from the Android Market.

The XPERIA Neo also includes Sony Ericsson's Timescape application, which first appeared on the XPERIA X10 Android phone. Timescape groups social networking and phone communications into a single, graphically-intense interface; each communication event on the phone forms a 3D box that allows you to simply flick your finger up and down the "spine" to scroll through. Thankfully, Sony Ericsson has included Timescape as a regular app rather than integrate it into the XPERIA Neo's UI. This makes it unlikely to suffer the same Android software update delays as the XPERIA X10 did, and it's easily removable should you not wish to use it, which we didn't. We don't think Timescape offers anything compelling besides an attractive look.

The XPERIA Neo's camera is a little light on settings, but the camera app is intuitively laid out with options on the right, and recently taken photographs on the left. The camera lens is perfectly positioned toward the centre of the phone, so it's easy to frame an image using the screen. We also like the camera shutter button, which although small, can be slightly pressed to focus, and then pressed further to capture an image.

The Sony Ericsson XPERIA Neo comes with an HDMI-out port, meaning you can connect it directly to a high-definition television. Along with DLNA connectivity for wirelessly-sharing media content, the XPERIA Neo is well equipped for multimedia sharing. The XPERIA Neo has a microSD card slot, but Sony Ericsson has only included a paltry 320MB of internal storage. An 8GB microSD card is included in the sales package.

Unfortunately, the Sony Ericsson XPERIA Arc has below-average battery life. Most users will get around 24 hours of life out of the XPERIA Arc's 1500mAh battery before it needs a recharge.