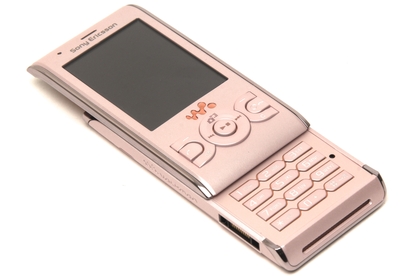 Sony Ericsson's W595 doesn't deliver anything new or innovative and its build quality is questionable. However for the features it offers, it's reasonable value.

Another mid-range Walkman handset, the Sony Ericsson W595 mobile phone doesn’t offer anything new or groundbreaking and its build quality is questionable. Despite these issues, it remains a reasonable handset for the asking price.

The Sony Ericsson W595 won't turn many heads with its design (aside from the optional pink colour scheme). It has a chunky slider and a screen that seems like it could have been much larger — there is plenty of unused space surrounding it. The rear battery cover rattles, squeaks and feels flimsy, while the slider mechanism is wobbly, especially when opened.

The phone's controls are fairly straightforward, but considering the amount of space above and below them, we can't understand why they are so cramped. A five-way navigational pad does most of the work, aided by two selection buttons, answer and end call keys and clear and shortcut buttons. The keypad looks straightforward, but the flat keys require a firm press, slowing down messaging. Thankfully, the display is bright and clear, performs well in sunlight and has reasonable viewing angles.

Although the Sony Ericsson W595's design is underwhelming, under the hood it is a different story. It doesn’t offer anything new, groundbreaking or overly exciting, but the features it does possess are well designed and implemented, starting with the Walkman software. An icon represents each menu and the tiered interface is user friendly. The software also supports album art.

TrackID is once again available, allowing you to record a few seconds of any song you wish using the external microphone. The recording is then sent to a music database and if the song is recognised, the title, album and artist name are sent back to you. A2DP Bluetooth and an FM radio are also available, while Shake It! and SensME technologies are both present. Shake It! allows you to skip tracks by shaking the handset, while SensME allows you to create a playlist based on mood and tempo.

The Sony Ericsson W595 doesn't include a 3.5mm headphone jack, but the proprietary connector features a 3.5mm adapter. You can also tailor your audio using the five band equaliser or the four presets including Sony's proprietary Mega Bass.

We were impressed with volume and clarity of voice calls on the Sony Ericsson W595, though using the hands-free speakerphone with some background noise isn't ideal.

Other features include a 3.2-megapixel camera on the rear, a video player and games, as well as some of Sony Ericsson's proprietary applications such as VideoDJ, PhotoDJ and MusicDJ. The camera is fair and doubles as a video recorder, though no flash means night-time photography is impossible. The Sony Ericsson W595 also includes remote control and sound recording functions, and Bluetooth 2.0 connectivity, while PIM features include calendar, tasks, notes, alarms, calculator, synchronisation, timer and stopwatch applications.

The phone only has a paltry 40MB of internal memory, but there is a Memory Stick Micro (M2) card slot — annoyingly located behind the rear battery cover.