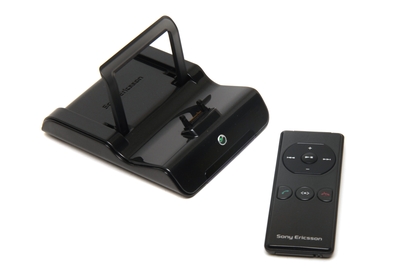 The MRC-60 is a straightforward solution to playing music on your mobile phone through your home stereo setup.

The Sony Ericsson MRC-60 is a handy accessory that allows you to connect your mobile phone to a home stereo and control it via a remote control. The MRC-60 can control both the media player and FM radio of your phone, and the cradle doubles as a charging dock.

The MRC-60 is a really simple device; dock your phone in the cradle, plug the included RCA stereo cable into your home theatre and press play on the remote control. Ease of use is apparent, and the setup is quick and easy. Also included in the sales package is an AC charger, which plugs into the rear of the cradle next to the stereo cable. Connecting the charger means your phone will be charged every time you dock it in the cradle.

Unfortunately, despite the presence of a proprietary Sony Ericsson port, the MMC-60 doesn't double as a USB connection to your PC. We felt this would have been an excellent inclusion; specifically for those with media centre PCs. Not only could you have the phone plugged into your stereo, but it could also be synchronised with your media centre, allowing new music to be uploaded easily.

The remote control is small and compact and it includes a five-way navigational pad, answer and end call keys (for answering a call with speakerphone) as well as a source button, for switching between the multimedia player and the FM radio on your phone. The buttons do require a fair press to operate, and they are fairly flat, but overall, the remote is quite intuitive. Conveniently, holding down the previous/next buttons in the FM radio function automatically searches for frequencies.

The design of the MRC-60 is sleek and flashy, and it matched our K810i review handset perfectly. The purple light at the bottom of the cradle is a nice touch, and each time the remoter is pressed, the light flashes to indicate activity. It is compatible with the K530i, K800i, K810i, K850i, W660i, W850i and W960i handsets.