A Cyber-shot mobile phone that possesses a good quality camera, the C903 offers little else to get excited about 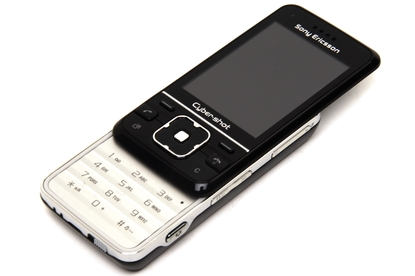 Sony Ericsson's C903 Cyber-shot mobile phone will suit those looking for a basic phone with a good camera, but there is little else about this handset that will get you excited.

Looking almost identical to a standalone digital camera from the back, the C903 is Sony Ericsson's latest Cyber-shot mobile phone. This camera phone takes reasonable photos, but its build quality is questionable and there really is little else to get excited about.

The Sony Ericsson C903 mobile phone is a standard slider phone — a design that we've come to expect from Sony Ericsson. As such there is nothing really new or remotely interesting about this handset, especially in this day and age of touch-screen smartphones. The black design is rather bland in our opinion and the glossy surface means grubby fingerprints are nearly impossible to avoid. We also noticed the area above the screen that houses the speaker gets noticeably hot during use.

Although its lower price and different target audience mean it can’t be fairly compared to devices like the iPhone, the Sony Ericsson C903 unfortunately seems built like a budget handset. The plastic body feels flimsy and creaks when you press the rear battery cover and the keypad. The buttons also feel underwhelming, with the five-way navigational pad digging into your fingers due to its edged design and the selection buttons are a little too small. Thankfully, although the keyboard looks flat, the keys are actually slightly raised and provide decent tactility when messaging.

The Sony Ericsson C903's 2.4in display is actually quite impressive for a mid-range handset, offering excellent viewing angles and bright, crisp colour. Sunlight glare is a problem when used outdoors as light tends to reflect off the screen, making it hard to see.

The C903's 5-megapixel Cyber-shot branded camera is this phone’s highlight, and the good news is it's pretty impressive. Along with a nifty lens cover that forms part of the rear casing (and slides all the way down the phone) the C903's camera includes a dual LED flash, autofocus, an image stabiliser, smile shutter, face detection and Sony Ericsson's BestPic function. BestPic takes a total of nine photos with one press of the shutter button, allowing you to select the best one. Four pictures are taken as the camera button is pressed and four just after its released (using memory buffing). This is ideal for capturing still images of moving objects.

Aside from shutter lag, the C903's camera takes reasonable photos, with less image noise than we're used to seeing from mobile phone cameras. The flash is reasonable but far from outstanding for low-light photography, though it does an adequate job provided your target isn't too far from the camera.

Sony Ericsson has stuck to its familiar proprietary interface on the C903 and although it's easy to use and quite fast, there is no app store or ability to tweak the interface (aside from the preinstalled themes).

The Sony Ericsson C903 has a built-in GPS receiver and comes preloaded with Google Maps and Wayfinder Navigator software. The latter provides full turn-by-turn navigation but has an extra subscription cost. Wi-Fi isn't available but the C903 has Bluetooth and USB connectivity and is an HSDPA phone.

An excellent media menu is a highlight of the Sony Ericsson C903; it uses the same tired interface as Sony Ericsson's Walkman range of mobile phones. Unfortunately, the C903's multimedia capabilities are let down by the lack of a 3.5mm headphone jack and there isn't even an adapter included to use regular headphones. Only 130MB of memory is available on the Sony Ericsson C903 mobile phone but a Memory Stick Micro (M2) card slot is located behind the rear battery cover.