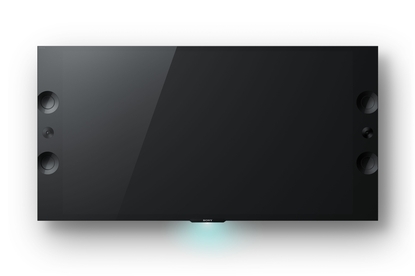 The 55-inch X Series BRAVIA, and its 65-inch sibling, are not cheap televisions, but they are a great way to watch TV and movies. Good inbuilt speakers means the X Series is a fantastic all-in-one panel, although they can’t be removed when you’re using your home theatre system.

The 55-inch model is the cheapest of the three, but is still expensive: at $5,999, it’s half as expensive again as Sony’s top non-4K W900A, which is a Full HD screen of very high quality. Given that every Blu-ray movie is Full HD already, and that Ultra HD video is restricted to a few outliers like TimeScapeds, is it worthwhile buying a Ultra HD TV like the X Series?

The 55-inch X Series BRAVIA is quite large for a 55-inch screen — it’s definitely wider, taller and thicker than the Samsung Series 8 (F8000) LED TV, for one. The reason for this is the magnetic ferrofluid speakers built into the left and right bezel of each X Series TV; Sony says that they’re the first of their kind used in a television.

The speakers disrupt the otherwise smooth face of the X Series’ single pane of glass, but not massively so. Each speaker driver (there are three on each side) cuts a circle from the bezel, recessed slightly inside a smooth plastic cone. It’s not the most attractive design we’ve seen, but for a television with integrated front-facing speakers it does a pretty good job.

The X Series BRAVIA TV has the same connectivity setup that we’ve become used to on every high-end TV — and almost all TVs, really — in the last couple of years. There are four HDMI ports arranged across the side and rear, and three USB ports which all support a portable hard drive, USB flash drive, or other USB input. Wi-Fi is built in, with dual-band 802.11a/b/g/n support. While these are all that most users will need on the X Series, there’s also composite and component A/V break-outs, digital audio output, and Ethernet networking. If you want to connect your smartphone or tablet, one of the HDMI ports is MHL-ready.

Setting up the X Series is reasonably simple — since the speakers are integrated, the only construction that needs to take place is lifting the TV onto its one-piece stand, which is a large brushed metal hoop. Screw in half a dozen screws to secure the panel, plug in the power and antenna and any other connectors you might need, and you’re set. The TV is quite heavy and bulky for a 55-incher, so it’s a two person job.

The TV’s introductory menu runs you through a few simple setup procedures — connecting to your home network (whether wired or wireless), scanning for channels, and introducing you to Sony’s one-touch remote control. Like all other premium TVs, Sony has decided that one remote is not enough, so a second, simpler, slimmer clicker is also included with the X Series. It doesn’t have any of the voice control or hand-waving motion features of other premium remotes, if that matters to you.

The X Series is the first Sony TV we’ve seen with the company’s TRILUMINOS backlight technology, based on quantum dots that significantly improve the colour gamut of the TV’s LCD panel. If you’re watching an appropriately high quality movie, like a Blu-ray or a well-mastered DVD, you can notice the difference. There’s a wider range of colour available for the X Series to work with, so while it’s not really fair to say that it’s a more colourful or vibrant TV with every movie you watch, it’s certainly more versatile and will look better with a wider range of content.

Sony’s X Series flatters any Blu-ray movie that’s played on it. Find a title like The Amazing Spiderman or Samsara or Looper and you’ll see that this 55-inch panel has an incredible ability to make movies pop and come to life, straight out of the box without any calibration. Choose the Cinema mode, dim your lights and draw the curtains, and a high-quality Blu-ray disc looks absolutely great. Perhaps not as vibrant as we’ve seen on OLED or plasma, but pretty great nonetheless.

Being a 4K panel, the X Series BRAVIA (of all sizes) has a resolution of 3840x2160 pixels, four times that of a 1920x1080 pixel ‘Full HD’ screen. This means it can display Ultra HD movies in their native resolution — and doing so will show off the screen’s best possible picture quality, if you can find an appropriate movie.

We happen to have a copy of TimeScapes in 4K, so we tried to watch it on the X Series BRAVIA via the TV’s USB port — only to find that it wouldn’t play. Sony’s top TV handles 1080p Full HD compressed video files (in the .MP4 format) just fine, but trying to play the 4K version of TimeScapes resulted in an error: “this format is unsupported”.

Playing the file through a Blu-ray player capable of 4K video output, the Oppo BDP-103, TimeScapes in 4K looks absolutely amazing. The Sony X Series BRAVIA’s Ultra HD display is incredibly detailed, and if you’re sitting at a ‘normal’ viewing distance or closer you can definitely see the difference. We also played the 1080p version of the movie to test the X Series’ up-scaling, and while the difference between the two is obvious, Sony’s X-Reality Pro video processing engine does a surprisingly good job of cleaning, tweaking and sharpening lower resolution content to suit its Ultra HD panel — and given that for the time being, you’re only going to be watching Blu-ray, that’s a very important box to tick.

The X Series’ speakers, with a triple-driver, mid-tweeter-mid arrangement that is popular in high-end loudspeakers, are the best we’ve heard on a TV. They don’t have a huge amount of bass — they’re still built into a TV’s relatively thin chassis, after all — but they are clear, and have a lively sound with a good deal of power. Maximum volume is painfully loud, as you’d expect, with minimal distortion to spoil your movie-watching. There’s a comprehensive equaliser built into the TV’s menu, so you can adjust the sound to your liking.

Our main concern with the speakers is that they don’t play well with a proper home theatre setup. If you’ve got a 5.1- or 7.1-channel surround sound system, they become superfluous, and we’d think there are plenty of X Series buyers at $5,999 who have a spare few dollars for a high-end audio setup. Removable speakers would have been a more practical, but less elegant, idea.

The interface of this TV is basic, clean, and smartly laid-out, with the same understated elegance that Sony has always been good at with its home entertainment products. Sony’s X Series eschews the voice commands, camera-based gesture control, motion remotes, and other superfluities you’ll find on Samsung and LG TVs. We don’t miss them in the slightest — we use our TVs for watching TV, and a remote control works just fine, thankyou — but if you want your TVs to be packed full with the latest and greatest in show-off technology, you’ll be left wanting from the X Series. Navigating the menus with Sony’s standard boring ol’-fashioned remote control works perfectly adequately, responding quickly and working easily — there’s no impediment to overcome here.

Sony’s X Series BRAVIA Ultra HD TVs are excellent — there’s no disputing that. The TRILUMINOS backlight does an excellent job of making the most out of Sony’s extremely detailed 4K LCD panel, giving it a very wide colour gamut, and the ability to make your Blu-ray library look vibrant and colourful. The speakers are great, if you want to use them.

It is an expensive product, though. Cheaper Ultra HD TVs are coming out in a few months, which makes the X Series harder to justify. We think that Sony’s proof is in the pudding — that excellent backlight — and while it’s not an easy decision to make, we can see of these BRAVIAs being a good value purchase in the long run.