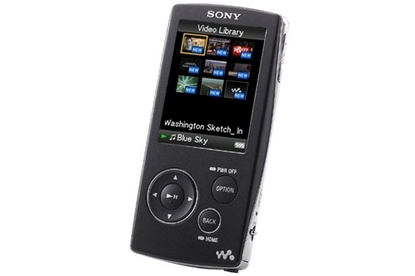 We need hardly add that the Sony Walkman NWZ-A818 is a player of rare beauty with quality Walkman-branded earphones adding to the appeal. Its black brushed metal is less shiny than its predecessors and we wish Sony had sorted out somewhere other than round the back for the Hold button; other than that, it's hard to fault.

Sony managed to impress us with the video quality of the first video-enabled portable music player it launched almost six months ago. Now the NWZ-A810s (also known as the A series), which range from 2GB to 8GB in capacity and include this model -- the Sony Walkman NWZ-A818 -- are equally impressive, but don't really add much to the mix.

The main upgrade is that A-Series Walkman video players such as the Sony Walkman NWZ-A818 dispense with Sony's proprietary Atrac music format. These MP4 players integrate with Windows Media Player. This is a sensible move, as the Connect software of previous devices was a real opinion-splitter.

This range of players retains the navigation format of the previous generation. The Sony Walkman NWZ-A818's four-way navipad also lets you start and pause playback while directory listings are split into three chunks and you can then scroll quickly up and down to locate items.

The Sony Walkman NWZ-A818 has a squarish 2in screen on which to flick through listings in your music collection and view photos or video. The video quality on the exceptionally clear screen is an absolute joy to behold. We're still stunned at just how crisply the tiniest detail is rendered. Apple has done a great job with the nano, but the Sony Walkman NWZ-A818's display beats it. Just.

Music playback comes with or without album art, while the equaliser functions are easily the best here. You can customise the equaliser and select the acoustic effects under the VPT (Surround) menu should you want to hook up the Sony Walkman NWZ-A818 to an external speaker.