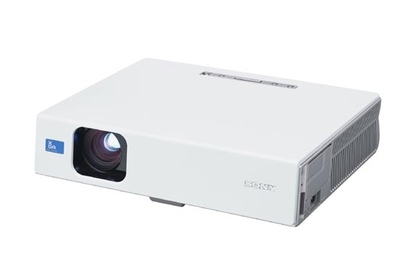 If you're interested in a projector that supports wireless presentations, the feature-rich Sony VPL-CX76 is a worthy choice. A higher-end version of the Sony VPL-CX20A, this LCD model has a similarly clean, stylish design that keeps some of its controls and inputs hidden behind panels on the sides of the projector. Its automated features include a powered lens cover, automatic tilt adjustment, automatic keystone correction, and powered zoom and focus operable via remote control.

Compared to the lightweight CX20A, however, the 6.8-pound CX76 is larger and brighter (with a 2500-lumens rating, enabling it to work well in fairly large rooms that have moderate ambient light). It also packs more features to help justify its higher price. Most notably, it comes bundled with an 802.11b/g wireless LAN card (for the projector) and a comparable wireless LAN module (for the host PC) so it supports wireless presentations right out of the box. The CX20A has a Memory Stick slot for running presentations or displaying JPEG or MPEG files without requiring connection to a computer, and it comes bundled with software for creating files for a Memory Stick-based presentation. Sony tosses in a pocket-size presentation device that includes a laser pointer.

In performance tests run at its default settings, the CX76 earned better-than-average scores for text and graphics display. It earned high scores for rendering crisp text in a spreadsheet screen and for displaying vibrant, realistic color in various photo screens, including ones of a racetrack and a colorful selection of candy.

In our moving-image tests, however, the CX76's scores were closer to average. The CX76's few alternate picture modes (such as dynamic or standard, and text or graphics) helped improve the quality of some still images and video. The greatest improvements in displayed video came when we changed the color temperature from high to low, but Sony doesn't provide a preset option (such as a video mode) to make the switch for you automatically.

The CX76's on-screen menu works well, and we especially liked the way the main menu disappeared from the screen while we made certain tweaks, leaving only the option we were using displayed on the bottom of the screen. The unit provides basic image-adjustment tools, but offers fewer advanced options (such as individual RGB control) than some competing models.

The easy-to-use, standard-size remote includes a small but fluid joystick for full mouse control. A USB cable and a computer (VGA) cable are included, but no others for video or audio. The built-in (1-watt) speaker is fine for undemanding presentations, but for home-theatre use we'd want a more powerful sound system.