Better than a TV? 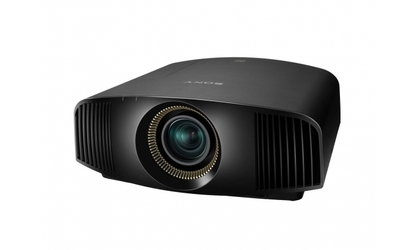 Huge, heavy and expensive but with great performance. There are a few things missing with this long in the tooth projector, though and the market could be about to change.

I’ve always been a big advocate for home theatre projectors. I understand that not everyone has the space to accommodate one at home, but if you have a light-controlled living room or a spare bedroom, why wouldn’t you want to turn it into a true home cinema?

While television makers continue to charge a serious premium for larger screen sizes, you can pick up a quality 1080p projector that is capable of beaming a 150-inch image for the price of a 55-inch television. Personally, I do all my TV, movie and gaming on a 110-inch projector which I have set up in a dedicated media room.

Sadly, 4K projectors haven’t evolved as quickly as televisions and so you’ll still need to pay a hefty premium for the privilege. Right now, Sony’s SXRD system is one of few offering native 4K projectors. This means that unlike televisions which are limited to ‘UHD’ 3840 x 2160 resolution, Sony offers a true pixel count of 4096 x 2160 - bringing it in line with commercial cinemas.

Sony’s mid-ranger - the VW-520ES - is the first 4K projector to support HDR and it retails for a whopping $14,990. I decided to find out whether it was as good as the astronomical price tag suggests by testing it out for a month.

As far as projectors go, the 520ES is a stylish piece of kit in a no-nonsense kind of way. Its black bodywork and curved edges is quite attractive while the gold stripes dotted around the edges of the large lens are tastefully done.

But make no mistake - this thing is big and heavy especially when compared to 1080p projectors. At 495.6 x 195.3 x 463.6mm and 14KG in weight, the VW520ES is likely to cause havoc for existing ceiling mounts. In my case, the unit wouldn’t fit on the ceiling where my Panasonic PT-AE8000 mounted comfortably, so I had to settle for resting it on the table. Those interested in the 520ES should first check to see that they have the space to accommodate a unit of this size.

Read more What size 4K TV should I buy?

To alleviate some of the space concerns, Sony has at least put the ports on the side of the projector and the air vents and exhaust are positioned on the front. This means you can place the projector right up against the back wall of your room without affecting cooling.

Sadly, there’s no electronic lens cover which is a real shame particularly at this price point. Instead, you will have to remember to put the plastic cover over the lens when not in use.

Crucially, the 520ES offers generous levels of lens shift (85% vertical and 31% horizontal) with a 2.06x zoom, giving it some flexibility when it comes to installation and room size. As a testament to this, my Panasonic projector could only muster an 88-inch 16:9 widescreen picture in my dedicated media room which is limited to a throw distance of 3.53 metres, but the 520ES produced a bright 110-inch image at the same distance. Both the zoom and focus are motorised so you can adjust them via the remote control.

As is the case with most projectors, you can output an image of up to 300-inches provided you have a large enough light-controlled room and a screen to match. Though it’s worth remembering with home theatre projects that picture brightness can drop off dramatically at its maximum image size so you’ll want to keep the picture below 150-inches to maintain optimal picture quality.

The projector is equipped with two HDMI ports though only one of the two is HDCP 2.2 compatible. Given that most will choose to use up only one HDMI port for connecting their AVR, this isn’t much of an issue.

The 520ES is one of the few projectors on the market capable of playing Ultra HD Blu-rays with HDR and at a 10-bit colour depth. However, videophiles should note that the HDMI port is limited to 10.2Gb/s bandwidth instead of the more up to date standard of 18Gb/s which supports higher frame rates. This means that while most Ultra HD Blu-ray content will playback at 10-bit with 4:2:2 colour subsampling, 4K material encoded at 50 or 60 frames a second typically found in sports and music concerts, will drop down to 8-bit 4:2:0. Considering the price tag, we would have liked to have seen Sony future-proof the projector with full-bandwidth HDMI 2.0 ports.

Outside of HDMI, there’s an Ethernet slot for IP control, the obligatory RS232 Serial port and a USB port for software updates.

The 520ES does take quite a long time to warm up and cool down, which can become bothersome if you typically turn your projector on multiple times a day.

Going back to my relatively small room size, an issue that I often face with 1080p projectors is that I can make out visible pixels especially in bright scenes. However, the significantly higher pixel count of the 520ES eliminated the dreaded screen door effect completely.

While the benefits of 4K can be hard to discern on a television, the same cannot be said for projectors - the much larger image benefits greatly from the added resolution. I did a blind test with some family members and friends and every one of them commented on the image detail and level of clarity on show.

I tested the unit with a wide array of sample 4K content and I was floored by what I saw. The names on players jerseys from a FIFA World Cup match became visible while the the crowds were more animated than ever. Landscape scenes revealed individual blades of grass and the balconies of apartment blocks dotted in a city skyline became visible. Skipping to a clip of Elysium, I could see every pore and the individual strands of hair. Images that previously seemed flat now had real depth and texture, giving scenes an almost three dimensional feel. In short, the 520ES produced the finest picture quality we’ve ever seen on a sub-$15,000 projector.

With that said, there are areas where we would like to see some improvement.

The playback device that Sony provided lacked HDR support so we loaded the sample clips onto the Nvidia Shield which supports 4K HDR playback. The projector had difficulty auto-detecting HDR enabled video files so we had to manually switch to HDR using a button on the remote which produced disappointing results. It added greater depth to some scenes but crushed reds and blacks in others. Turning off HDR actually looked much better. Hopefully, Sony can address this issue in a future software update.

It’s also worth noting that projectors generally cannot output a brighter image than televisions and as a result, the visual difference between HDR and standard dynamic range content isn’t as pronounced on the 520ES. To eke out maximum brightness, you’ll need to crank up the projector to its high-powered ‘Normal’ mode when viewing HDR which reduces the lamp’s lifespan and increases the projector’s cooling fan noise to audible levels. Otherwise, we would recommend running the projector in ‘eco’ mode which is near silent.

We tested the 520ES projector before Samsung’s 4K Blu-ray player was available so we were unable to see how it performed with UHD Blu-rays. Regular Blu-rays up-scaled beautifully though and Sony’s ‘mastered in 4K’ selection added more colour vibrancy to classic films like Taxi.

Another format that truly shines on projectors is 3D which the 520ES supports. Unfortunately, Sony doesn’t include 3D glasses with the unit so we were unable to test out its 3D performance.

On a bright note, I was able to test out 4K gaming performance by connecting my gaming rig to the projector. Sony televisions and projectors are often favoured by gamers for their low input lag and the 520ES is no different. Switching the projector to ‘gaming mode’ and booting up the recently released Tomb Raider in 4K at 60 frames per second was a real treat for the eyes with no perceptible signs of lag. Switching off “input lag reduction” did reduce responsiveness to noticeable levels so we would recommend keeping this setting enabled for gaming.

There’s no denying that the 520ES offers the best picture quality in its class. Whether it was UHD content, upscaled Blu-rays or gaming, the 520ES produced unbeatable results. Sony has some issues to iron out with HDR playback and we would be curious to see how it performs with HDR-enabled UHD Blu-rays. The 520ES was, after all, released at a time when the UHD Blu-ray spec was still being finalised so we expect to see Sony release firmware updates to bring this projector up to speed, particularly in the way it handles HDR content.

But there’s no getting around the fact that the $14,999 price tag puts this projector out of reach for most people. Sony’s ‘cheapest’ 4K projector is the VW320ES that costs just shy of $11,000. It’s a shame that Sony hasn’t worked to bring these prices down since it launched its 4K line of projectors almost three years ago. Prices have remained stagnant and the updates made in that time have been incremental at best. The only obvious difference between the 520ES and the outgoing VW500ES is a slight bump in the lumens and contrast ratio as well as HDR playback.

Few other manufacturers have been capable or willing to release a native 4K projector. The likes of JVC and Epson do offer ‘enhanced’ 4K projectors for under $5,000 that essentially up-scales the image using 1080p chips but nothing in the way of a native 4K projector that directly competes with what Sony is offering. Considering the significantly cheaper price, the enhanced variants from JVC and Epson might be worth an audition but we can't speak to their picture quality as we haven't yet tested one in-house. However, when it comes to true or native 4K projection for the home, Sony effectively has the market to itself and so it can pretty much dictate terms when it comes to price, which doesn’t bode well for anyone looking to buy a true 4K projector at a reasonable price.

Now then, is the VW-520ES worth the investment for those who have the finances? The 520ES is getting a bit long in the tooth now so I would advise putting off the purchase until we see what appears on the market in the next few months.