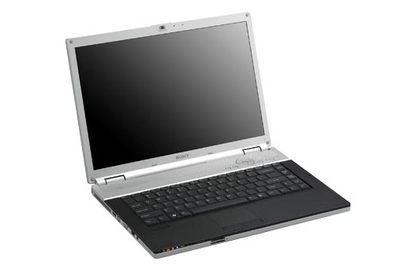 It looks good, has good processing power, and it's well-suited as a notebook for everyday tasks. However, it's not really a great unit for high-definition video endeavours, as it lacks a Full HD screen and a Blu-ray drive.

The Sony VAIO VGN-FZ37G is marketed as an 'Advanced AV Multimedia notebook', but it doesn't live up to this label.

It lacks the Blu-ray drive found in the HP Pavilion dv9800 (dv9821tx) as well as the Full HD screen of the Acer Aspire Gemstone Blue (8920G)— these are units that are similar in cost and better suited to multimedia purposes.

When thought of as an all-purpose notebook, however, it fares better thanks to a fantastic 15.4in screen, Sony's signature good looks and a very speedy CPU.

At the notebook's core is a 2.4GHz Intel Core 2 Duo T8300 CPU and 2GB of DDR2 RAM. It's also equipped with a 250GB hard drive that spins at 5400rpm. We've seen good results from other T8300-based devices, and this notebook didn't disappoint — in our iTunes benchmark, where we test the CPU by converting 53min worth of WAV files into 192Kbps MP3s, the FZ37G completed the task in an impressive 1min 13sec.

Our WorldBench 6 result of 90 also reinforces the notebook's speed, and means that users can expect even the most processor-intensive tasks such as video-encoding to be done with relative ease.

The NVIDIA GeForce 8400M GT graphics card is less remarkable. Although it will work well for viewing video and images, its 3DMark06 score of 2546 means that gamers will have to look elsewhere— even older DirectX 9 games like F.E.A.R. will struggle to play above minimum settings.

As for its video capabilities, the unit sports a "Full HD 1080" label that may cause some people to believe that the screen itself is capable of displaying HD content at 1080p. What Sony actually means is that the 8400M GT is capable of transporting 1080p visuals via HDMI to a HD-ready television. You'll have to store HD content on its 250GB hard drive if you wish to use the FZ37G as an HD player, as it doesn't ship with a Blu-ray drive.

However, the 15.4in screen's inability to actually display Full HD resolution should not detract from its good qualities: It's excellent in every other aspect. Providing low-reflectivity and a large viewing angle, it also features great colour contrast and there was no dithering during DVD watching.

The screen is also built solidly with very little flex, and the solid construction continues throughout the rest of the unit — the notebook has a professional and dependable feel to it. The stylish full-sized keyboard is a slight letdown, as it doesn't provide enough bounce when typing.

The left-hand side of the unit holds most of the ports, including the HDMI port, S-Video out port, D-Sub port, FireWire port and ExpressCard/34 slot. This gives the Sony a good variety of expansion options and also allows a wide variety of display devices to interface with the notebook.

The Sony is equipped with three USB 2.0 ports, two of which are on the right-hand side of the notebook next to the dual-layer DVD-RW drive, microphone port and headphone port. Other peripheral devices such as microphones or headsets can be accessed through the built-in Bluetooth 2.0 adapter. A four-in-one card reader (MS, MSPro, MMC, SD) sits on the front of the device.

With all these features, the Sony weighs in at 2.6kg without its power supply and 3.1kg with it. This means that it's light enough to be used on the go, although our worst-case scenario battery test returned a disappointing time of 1hr 18min.