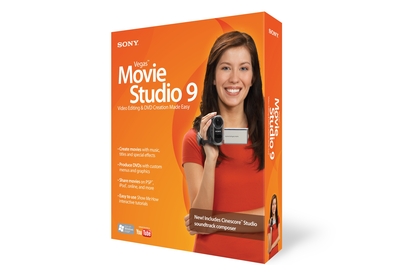 Sony Vegas Movie Studio 9 may not be as comprehensive as its Platinum brother, but it remains an extremely solid offering for novice videographers. If you'd like to add some pizzazz to your movies without breaking your bank account, it will definitely keep you satisfied.

When it comes to making entertaining videos, no single factor is more important than a misbehaving monkey. They will turn any home movie — even a funeral — into instant comedy gold. Unfortunately, monkeys can be pretty hard to come by. In these simian-free situations, the overall success of your video will mostly come down to the editing process. The quality of the final cut can make all the difference between a riveting movie and a tedious snorefest; whether you’re an avant-garde filmmaker or a handycam-equipped mum. It’s therefore essential to invest in a nonlinear editing suite, such as Sony’s latest Vegas Movie Studio.

Aimed primarily at the casual-shooting demographic, Vegas Movie Studio 9 is a standard-definition editing suite that puts user-friendliness at the forefront. It covers most facets of digital media creation; from adding effects, transitions and titles to designing slick DVD menus and slideshows. Its only failing comes from the lack of AVCHD/HDV support — for high-def cameras, you’ll need to purchase the more expensive Sony Vegas Platinum or Platinum Pro versions. Otherwise, this standard 'bare bones' edition offers nearly everything the entry-level user will need.

Despite being a stripped-down version of the full Sony Vegas product, Movie Studio 9 still contains plenty of tools and features for the asking price. Features making their debut in Version 9 include Make Movie/New Project wizard tools for streamlined video creation, a Cinescore Studio Plug-in for the creation of royalty-free music, an integrated YouTube upload tool for instant online publishing, and full-screen preview support for single monitors. In addition, all the modes and features from the previous version of Vegas Movie Studio are present and accounted for, making this one of the most versatile products in its price range.

With eight previous iterations of Vegas Movie Studio under its belt, Sony has had plenty of time to perfect its software interface, and it shows. Sticking to the standard tri-pane layout, everything is cleanly assembled and highly intuitive. Even those who have never used a video-editing program before will find themselves in good hands — there are more than 30 interactive tutorials to follow, covering everything from colour correction to DVD burning. (For the truly camera shy, a bonus training DVD is also included in the sales package).

Once your footage is captured, editing is a simple matter of selecting a clip and dragging it onto the editing timeline, where effects, titles and transitions can be applied with ease. More than 500 video effects and transitions are included, allowing you to make your movies as stylised or avant-garde as you like.

The audio options are also quite extensive, including support for Dolby 5.1 surround sound and audio restoration tools (for removing unwanted noise from footage). With the Cinescore Home Studio Soundtrack Pack, it’s also possible to create royalty-free soundtracks that perfectly fit the mood and length of your video. Naturally, some of the included themes suffer from ‘muzak’ syndrome (think elevator music), but all in all the included selection isn’t bad. You can also purchase additional themes from the Sony Vegas Web site.

For the first time, Vegas Movie Studio 9 lets you publish your work directly to YouTube. The interface automatically links to your YouTube account, allowing you to encode and upload videos in a few simple mouse clicks. If you’re a fan of online video sharing (or simply want to wet your toes in it), this feature is bound to come in handy.

Creating DVDs is equally achievable for the novice, thanks to the inclusion of DVD Architect Studio 4.5. This is a comprehensive DVD authoring program complete with slick menu templates that put many store-bought movies to shame. The package includes more than 40 different DVD themes, which should ensure the menu matches your footage (unless you’re making a snuff film).

In summary, Sony Vegas Movie Studio 9 offers plenty of features and functionality for the first-time videographer, with an emphasis on ease-of-use. It’s the next best thing to owning a showbiz-savvy orang-utan.