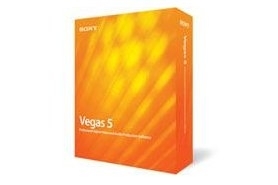 Still the musician's NLE with plenty of new features, though probably not enough to challenge the market leaders

Sonic Foundry's Vegas non-linear editor (NLE) now carries Sony's livery as well as a new version number. It's still a software-only NLE, so you'll need a powerful host system to see it at its best.

Existing users will be happy with the familiar front end - which now includes dockable, customisable windows like Premiere Pro - although some of the unusual workflow conventions may confuse anyone migrating from a competing product. Vegas's strongest point has always been its audio feature set, and this is still the case, there being MIDI support, quantisation and metronome tools, plus rulers that can be set to beats and measures rather than time and frames. Be aware, however, that the 5.1 Surround Pack with AC-3 encoding is still an expensive ($US289, download only) added extra, though the Vegas + DVD bundle includes DVD Architect with AC-3 encoding for $1249.

Overall, Vegas 5 isn't going to drag Liquid Edition, Premiere Pro or Xpress DV users away from their existing setups, but it should continue to find favour as the music producer's NLE of choice.