Sony's netbook has a better screen than most, but is it really worth the high asking price? We love the screen on the Sony VAIO W and think it's a good netbook overall. However, it needs more RAM and better features to make it worth the high asking price.

The Sony VAIO W (VPCW115XGP) is reasonably expensive but it's one of the best looking netbooks on the market, and it's reasonably comfortable to use. It has a keyboard with isolated keys, a large touchpad and a vibrant screen, as well as a lovely two-tone colour scheme. But it's also an underdone netbook, and its $999 price tag is excessive.

However, one feature that really stands out, and makes the price tag a little easier to swallow is the 1366x768 native resolution of the 10.1in screen. In fact, it's the best part about the Sony VAIO W (VPCW115XGP). It provides a much better view than most 10in netbooks on the market and it means that large dialog boxes won't be cut off at the bottom of the screen (like they are on netbooks with 1024x576 and 1024x600 resolutions). It does have the usual problems associated with many netbook screens: it's a glossy display, so it's going to reflect room lights, and it has a narrow vertical viewing angle, which can make it uncomfortable to watch movies. But when you view the screen from the correct angle, you'll see that it's capable of producing nice, rich colours. 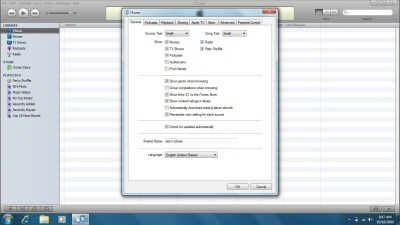 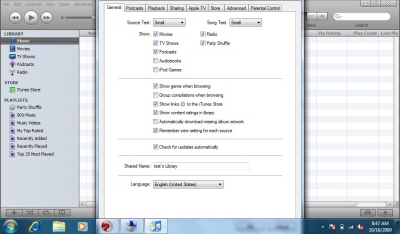 The Sony VAIO W has a 1366x768 screen (top) that's much more comfortable to use than a typical 1024x600 screen, such as that found on the Lenovo IdeaPad S10-2 (bottom), and many other netbooks on the market.

The configuration of the VAIO W is typical fare for a netbook. You get an Intel Atom N280 CPU, which runs at 1.66GHz and has a bus speed of 667MHz; 1GB of RAM, which is built-in and can't be upgraded; Intel GMA 950 graphics; and a 160GB, 5400rpm hard drive. The hard drive can be swapped out by removing the access panel on the bottom of the chassis, but there is no RAM slot. The fact that the memory can't be upgraded is a sore point, as 2GB would give the VAIO W a little more oomph when running multiple programs or working on large images.

In our performance tests, the VAIO W had its ups and downs. It produced an expected time of 7min 02sec in the Blender 3D test, but it was slightly below average in the iTunes MP3 encoding test, recording 8min 19sec. Its hard drive transfer rate was also below average; it recorded 16.69 megabytes per second, which just over 3MBps slower than expected. All this doesn't really make much of a difference in the real world, especially as a netbook shouldn't be used for taxing tasks such as media encoding and rendering, but a little more speed from such an expensive netbook would have been nice.

The VAIO W comes preinstalled with Windows XP, but we also installed Windows 7 Release Candidate (Build 7100) using a USB key. The installation took close to 25min and all the hardware components were found except for the Memory Stick reader and the Sony Notebook Control Device. We had to install these drivers manually. Like the Lenovo IdeaPad S10-2, graphics performance was sluggish under Windows 7, and this manifested itself in the poor redraw of menus and splash screens, particularly in Blender. We had to update the graphics driver to version Ver:15.12.75.3.1912, which can be obtained from the downloads section on Intel's Web site. Once this new driver was installed, the VAIO W's graphics performance was much better.

Battery life was also a shade shorter under Windows 7 than it was under Windows XP. In our standard battery test, where we disable power management, maximise screen brightness, enable the wireless radio and loop an Xvid-encoded video, the VAIO W's 3-cell battery lasted 1hr 48min, while under Windows 7 it lasted 1hr 44min.

A 6-cell battery would be appreciated for the VAIO W; battery life of less than two hours is not impressive for a $999 netbook. But a bigger battery would make the VAIO W too bulky (it weighs only 1.2kg with the 3-cell battery) and take away from the beauty of its low-profile 17mm base. And we do like the base, as it's very sturdy and doesn't get uncomfortably warm. It has two USB 2.0 ports and the network port on the right, the D-Sub (VGA) and microphone and headphone ports on the left, and the SD and Memory Stick readers on the front.

The keyboard's keys are only 13mm wide but they are seperated by 3mm. Although it does take some time to get used to typing on such narrow keys, they are reasonably tactile. The palm rest is larger than usual for a netbook (66mm), which is helpful when adjusting to the narrow keys. The biggest problem with keyboard is the smaller-than-usual right Shift key (10.5mm wide). It could be bigger if Sony removed the second Function key from the keyboard and moved the Up arrow one space to the right. 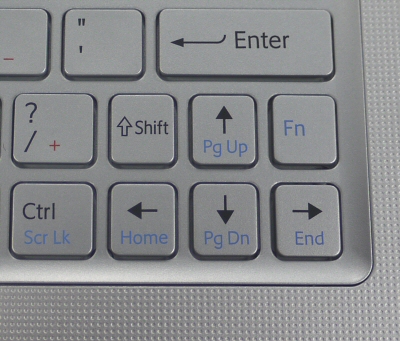 The right Shift key on the VAIO W is far too small to be useful.

There's no doubt that the 10.1in Sony VAIO W netbook is overpriced when you consider what's on offer. Its big palm rest, reasonably good keyboard and 1366x768 screen are great features. However, for $999 it also needs to have Gigabit Ethernet, three USB 2.0 ports, 2GB of RAM, and perhaps even a solid-state drive instead of a conventional hard drive. Without these features, the VAIO W is just another netbook, albeit with a little more style and a nicer screen than most.