Sony's "pocket style PC" is slim, sexy and stylish, but does the VAIO VGNP15GG notebook have enough grunt under its hood? There is no denying the Sony VAIO P Series' portability and style are compelling. However, the Sony VAIO VGNP15GG certainly doesn’t come cheap and performance isn't up to the standard we expected. Still, there is simply no denying its aesthetic appeal and if you want a tiny notebook for travelling, there is plenty to like.

The downside to the small size is Sony's decision to opt for a TrackPoint-style device rather than a regular touchpad for the mouse. It sits in between the G and H keys on the keyboard, with the three mouse buttons located on the edge of the casing, below the keyboard. It is responsive and works well, but the biggest issue is the tendency to accidentally bump it while typing. Although this is something users will quickly adjust to, it’s annoying when first using the VAIO VGNP15GG. Thankfully, although it may not look like it at first glance, the mouse buttons are located in a comfortable position.

Under the hood, the Sony VAIO VGNP15GG sports a 1.6GHz Intel Atom Z530 processor, 2GB of DDR2 RAM and a 64GB solid-state hard drive (SSD). The Z530 processor is slightly different than the popular N270 processor used on most netbooks: it's smaller, uses less power and generates less heat. On paper, the specifications suggest that the VAIO VGNP15GG will run at similar speeds to most netbooks, but the results are quite different. In our iTunes test it took the Sony VAIO VGNP15GG 12min 52sec to encode 53min worth of WAV files to 192Kbps MP3s. This is quite a poor result, especially when compared to regular, less expensive netbooks such as the Samsung N120, which took 7min 53sec to complete the same task. 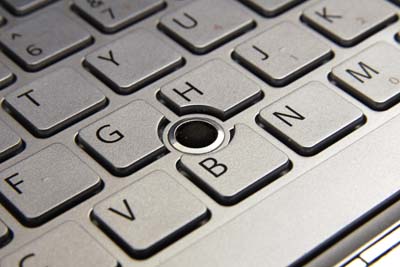 The TrackPoint device sits in between the G and H keys on the VAIO VGNP15GG's keyboard and will take some time to adjust to.

The fact that the VAIO VGNP15GG runs Windows Vista Home Premium and the high resolution of the display are two of the main reasons why this notebook is sluggish. Most notebooks run Windows XP, a proven OS that’s much faster than the taxing and sluggish Vista. Its not all bad news — the VAIO VGNP15GG is adequate for light use such as basic Web browsing and word processing, but running Vista in general is a struggle. At various stages during testing, even switching between applications and minimising windows seemed sluggish.

We suggest either downgrading to Windows XP, or waiting until October when Windows 7 is released. Current purchasers of the VAIO VGNP15GG will be able to upgrade to Windows 7, but Sony is charging for the privilege (price is TBC). This is distasteful not only considering the cost of this notebook but because most rival notebook vendors such as HP, Toshiba, Acer and ASUS are offering Windows 7 upgrades on selected machines free of charge.

The Sony VAIO VGNP15GG has limited ports due to its size, with just two USB ports and a proprietary Sony connector, along with SD card and Memory Stick card slots. The Sony connector handles VGA and Gigabit Ethernet through an included dongle. Bluetooth 2.0 and 802.11b/g/n Wi-Fi are both included.

Battery life isn’t great, with the Sony VAIO VGNP15GG's standard 3-cell battery lasting 1hr 48min in our battery test, where we loop a video file with the screen brightness at its highest setting. This test was conducted in high-performance mode, so you will get better results by changing the Windows Vista power settings. Sony also offers a longer lasting 6-cell battery as an optional extra for $249, though it does add slight bulk to the VAIO's frame. Sony doesn't include many accessories in the sales package, but it throws in a pair of noise-cancelling headphones.