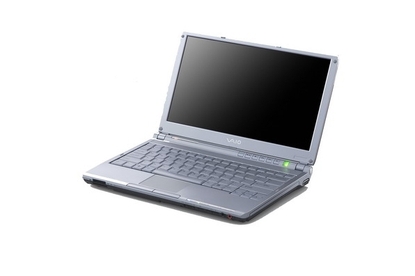 This VAIO is stylish and redefines the meaning of the term ultra-portable. We wouldn't recommend it if you are just looking for a notebook, but if portability is your number one concern, then you can't go past the VGN-TX27GP.

Sony has once again shown it has notebook style mastered to a degree that would make Steve Jobs green with envy. Focusing heavily on form, whilst squeezing out as much functionality as is currently possible is Sony's VGN-TX27GP, the follow up to the VGN-TX17GP. For the fashion conscious, a metallic bronze colour has been added to the fold.

Besides the new colour, Sony has upgraded the RAM from 512MB to 1GB of DDR2 and has continued using Intel's Ultra Low Voltage Pentium M 1.2GHz processor. This model, like its predecessor, also has a built-in double-layer DVD burner, which is amazing considering its light 1.25kg weight and tiny dimensions. It has an 11.1 inch LCD screen, which has a resolution of 1366x768 and the thickness of this screen is a slim 4mm.

There are aspects of this notebook that aren't as impressive as its physical features, particularly its performance in our benchmarks. It only managed a score of 52 in PC WorldBench 5 and in 3DMark 2001SE it only scored 3507. Both of these scores are significantly behind other notebooks priced at $3700, however, none of those would come close to the Sony Vaio's design and portability.

While its score in PC WorldBench 5 is low, it is actually quite competitive for an ultra-portable computer and puts the Vaio slightly ahead of its higher-priced competitors. When considering the applications that the TX27GP would be used for (mostly business applications to assist as a satellite to a desktop PC), and the hardware that it is based on, it performs superbly.

As for running time while away from a power outlet, the Vaio's lithium ion battery lasted for 270 minutes in MobileMark 2002. That is only eight minutes short of Fujitsu's ultra-portable Tega P7120.

For a better overall user experience, Sony's instant-on media player (which can be used without loading into the Windows XP operating system) has been upgraded to enable access to photos off the hard drive, as well as play DVDs and CDs. This player can be accessed via the dedicated media control buttons that sit along the spine of the notebook. They are accessible when the notebook is open or closed, which is great for when you are only playing music CDs.

The worst thing about the Vaio is its lack of upgradeability. The RAM slots are full and the chassis is a nightmare to pull apart in order to access the hard drive if you ever want to upgrade to a larger capacity.